31 May Timing is right

Posted at 14:21h in Features by SME Magazine

The over-100-camera Hikvision system now secures all aspects of the imposing House of Representatives and its grounds and has proved a resounding success, although only being allowed three hours access per day gave the installation team a bit of a headache. 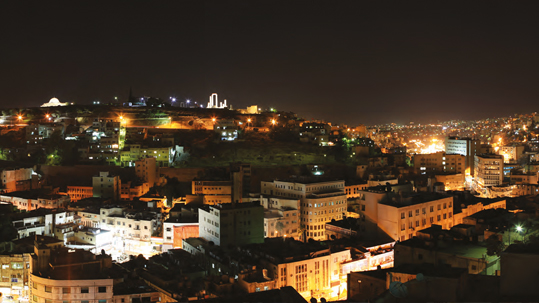 The Hashemite Kingdom of Jordan, situated on the eastern bank of the Jordan River that separates it from its neighbour, Israel, is widely recognised as a beacon of stability and parliamentary democracy in the Middle East. The current monarch, King Abdullah II, holds wide executive and legislative powers, sharing them with the Parliament of Jordan that was established in 1952. The legislature consists of two separate houses: the 75-member House of Senate (“Majlis al-Aayan”), all of whom are directly appointed by the King, and the 150-member House of Representatives (“Majlis al-Nuwaab”), which is elected.

Like almost all legislatures around the world, when the House of Representatives is in session, it is thronged with its own members, their advisors and officials, foreign dignitaries and their diplomats and officials, plus advocates and visitors. Therefore, when the House of Representatives’ Security Team decided that the CCTV system needed a complete overhaul, it was not only concerned with rapidly installing a system that would protect and secure the building and all its people within a well-defined budget, but also with allowing the business of government to continue as normal. As a result, access for the design and installation team was severely restricted.

“The house was functional throughout the period during which we had to complete the CCTV installation,” says Ammar Awamleh, IT manager at the House of Representatives. “Therefore, we were limited to a mere three-hour window on each day for the installation and the implementation team was under pressure to plan and execute accordingly. It was quite a challenge, as was the need for the system design to provide full CCTV coverage of vital areas of the building, including several key offices, the House of Representatives’ data centre as well as the main wall surrounding the entire complex.”

Hikvision was chosen to design and implement the CCTV surveillance system and came up with an over-100-camera solution, with each camera connecting to one of four 64-channel DVRs in the main control room. The solution was also notable in electing to use nine different types of IP network camera chosen from the Hikvision Easy IP and SMART IP series.

According to Ammar Awamleh, “Despite budget constraints, a high level of coverage of the main building and all its grounds and entrances was an absolutely key requirement of the new system and we made extensive use of Hikvision’s 1.3MP and 3MP 2-series IP cameras in order to achieve this. Around 100 2-series cameras were deployed, mostly DS-2CD2312-I and DS-2CD2332-I Outdoor Network Mini Dome cameras but supplemented with 9 DS-2CD2212-15 and DS-2CD2232-15 EXIR Bullet cameras.

“We recognised that the smart features, such as ‘Smart face,’ ‘audio and intrusion detection’, would greatly assist our control room personnel in recognising potential threats,” says Awamleh. “What’s more, the ‘Smart codec’, ‘Smart IR’ and ‘Smart VQD’ (video quality detection) is invaluable in areas where video quality is vital.

In addition, five DS-2CD4065F 6MP Smart IP Box cameras were deployed to provide much needed coverage on the main wall. Each is capable of providing three independent video streams and according to Awamleh: “The digital zoom in these cameras is excellent.”

“These high-end NVRs were chosen to fully support the 6-megapixel resolution of the Smart box cameras that keep watch on the main walls and, in supporting up to 256 connections, give us room for further expansion,” says Awamleh. “Also, the iVMS-4200 software provides a powerful and complete solution to our video management needs. ‘Smart’ and ‘Open’, it allows us to freely access the huge quantity of video data we are now collecting, being very easy to use and requiring minimal training to operate.”

“Although the process of installing the new system within the stringent time-constraints was very challenging, the new solution has proved to be a resounding success, with previously vulnerable key areas of the building now under full, round-the-clock coverage from the Hikvision equipment,” says Awamleh. “A small expansion is already planned and we have also recommended Hikvision to other projects holders.

“I can confidently state that the Hikvision CCTV solution provides total control over the site and has made life much easier for the building’s security team.”

View this feature in our online issue. 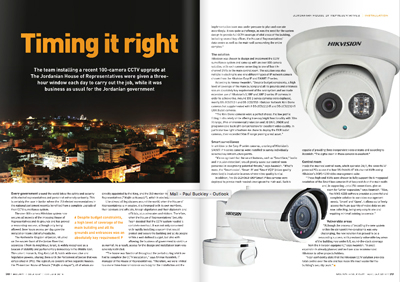