Posted at 13:22h in News by Claire Mahoney

The Dubai Government has praised the use of the  Airbus Defence and Space Tetra network which was used by local fire-fighters to tackle the huge blaze at the 63-storey high-rise The Address Downtown Hotel New Year’s Eve.

Mansoor Juma Buosaiba, Deputy Chief Executive Officer of Nedaa Professional Communication Corporation which runs the Tera mobile network for the Dubai government said: “We made the right decision in procuring a Tetra-based professional mobile radio system, which worked reliably and independently,” he said in a letter to Airbus Defence and Space.  He added that Airbus Defence and Space’s technology and contribution “saved many lives.” 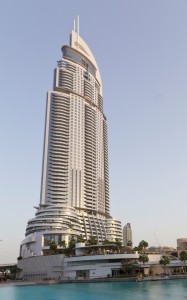 On New Year’s Eve 200 fire-fighters and other public safety organisations managed to evacuate people from 800 rooms, among them about 20 with minor injuries. Many observers of the incident considered the entire rescue mission as a great success

Even though a large number of people gathered in the vicinity around the 302 metre high hotel skyscraper, the comparatively tiny group of rescuers under the command of the Dubai Civil Defence were able to conduct their mission with professional mobile radio devices that work independently from other communications networks.

“This was an extreme situation in which people can easily panic, and conventional mobile networks could break down. However, this incident has shown that our communication solutions met the demanding requirements of public safety professionals,” said Zoltan Wirth, head of Middle East & APAC of Secure Land Communications at Airbus Defence and Space.

Dubai’s public service organisations succeeded in accessing the hotel building and contained the fire quickly. As they had to make many calls in order to block roads, carry out evacuations and locate people, the Tetra network was the vital backbone of the mission.

Airbus Defence and Space is a division of Airbus Group which combines Cassidian, Astrium and Airbus Military. It is among the top ten global defence enterprises. It employs more than 38,000 people generating revenues of approximately €13 billion per year.

The programme line Secure Land Communications (SLC) at Airbus Defence and Space develops, installs and maintains professional and land mobile radio (PMR/LMR) networks based on Tetra, Tetrapol and P25 technologies. The portfolio also encompasses emergency response centres (911/112). SLC is a leader in PMR, with more than 280 radio networks in over 74 countries. The programme line employs nearly 1700 people in 20 countries.