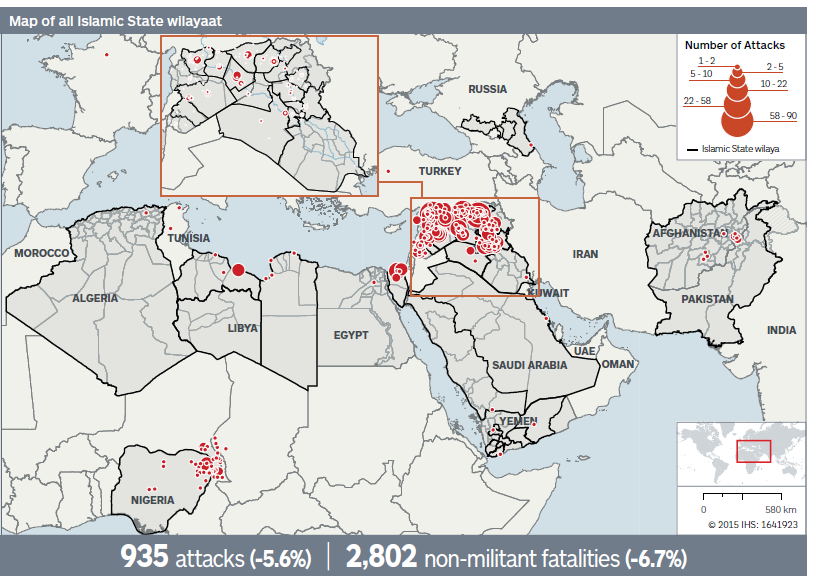 Posted at 09:36h in News by Claire Mahoney

“Following the start of airstrikes and Russian intervention in late September 2015, the number of Islamic State attacks in Iraq declined in the last quarter of the year, however, the number of attacks in Syria increased,” said Matthew Henman, head of IHS Jane’s Terrorism and Insurgency Centre.

“This is somewhat a consequence of the growing pressure the Islamic State has come under in Iraq,” Henman said. “In Syria, the group has had more room to maneuver and, at least for the time being, retained the ability to relocate fighters between different front-lines.”

The IHS Jane’s Terrorism and Insurgency Centre (JTIC) database recorded a total of 935 attacks claimed by or attributed to the Islamic State between 1 October and 31 December 2015, an average of 10.2 attacks per day. This is a 5.6 percent decrease in the average daily attack numbers from the preceding quarter (1 July to 30 September). However, the average daily attack figure was 5.2 percent higher than the preceding 12 month average of 9.7 attacks per day.

While the recorded level of attacks and fatalities decreased slightly between the third and fourth quarters of 2015, both figures continued to track above the average recorded over the preceding 12 months. The overall consistency in the level of Islamic State violence is illustrated in that the average number of fatalities per attack remained constant at 3.0 between the two quarters, in comparison to a lesser 2.8 over the preceding 12 month period.

The 10 October Ankara attack highlighted a notable trend over Q4, in that while the only new Islamic State wilaya announced was Wilayat Bahrain – although this remains unconfirmed – there was an increasing proliferation of official Islamic State attacks conducted beyond the borders of its officially declared wilayaat. The most notable was the coordinated attacks in Paris on 13 November, along with an attack the preceding day in the Lebanese capital Beirut. In addition, the Islamic State claimed responsibility for a series of six attacks in Bangladesh in the period, underscoring the group’s growing operational presence.