Posted at 09:28h in News by Claire Mahoney

Aspirating smoke detectors (ASD) from Xtralis are to be used as part of the fire prevention strategy at the new Abu Dhabi International Airport Midfield Terminal Building (MTB), scheduled to open in 2017. 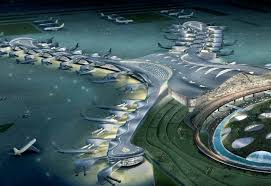 The MTB will be the largest in the Emirate of Abu Dhabi, and one of the region’s most architecturally impressive structures. Xtralis VESDA & VESDA-E aspirating smoke detectors are already in use at the Burj Khalifa, Emirates Palace Hotel, and Dubai & Abu Dhabi International Airports.

The new Midfield Terminal Complex (MTC) will have 700,000 sq-m of internal space for a passenger terminal (MTB), cargo facility, and restaurant and retail space. The size of the MTC is so impressive that it will be visible from 1.5 km away. The facility can accommodate 8,500 passengers per hour and up to 30 million per year. The central space of the terminal building could hold three full-sized football pitches and features a ceiling 52 m tall at its highest point, taller than the Emirates Palace and will include 28,000 sq-m of retail outlets and restaurants.

Chief among the challenges with protecting the MTB was the massive open space where smoke will be diluted, an effect compounded by air-conditioning systems. VESDA’s early and reliable detection combined with the VLS capability of monitoring the protected space by sectors were key factors that resulted in the selection of the Xtralis solution. Additionally, temperatures in the terminal could range from hot to cold, depending on the weather.