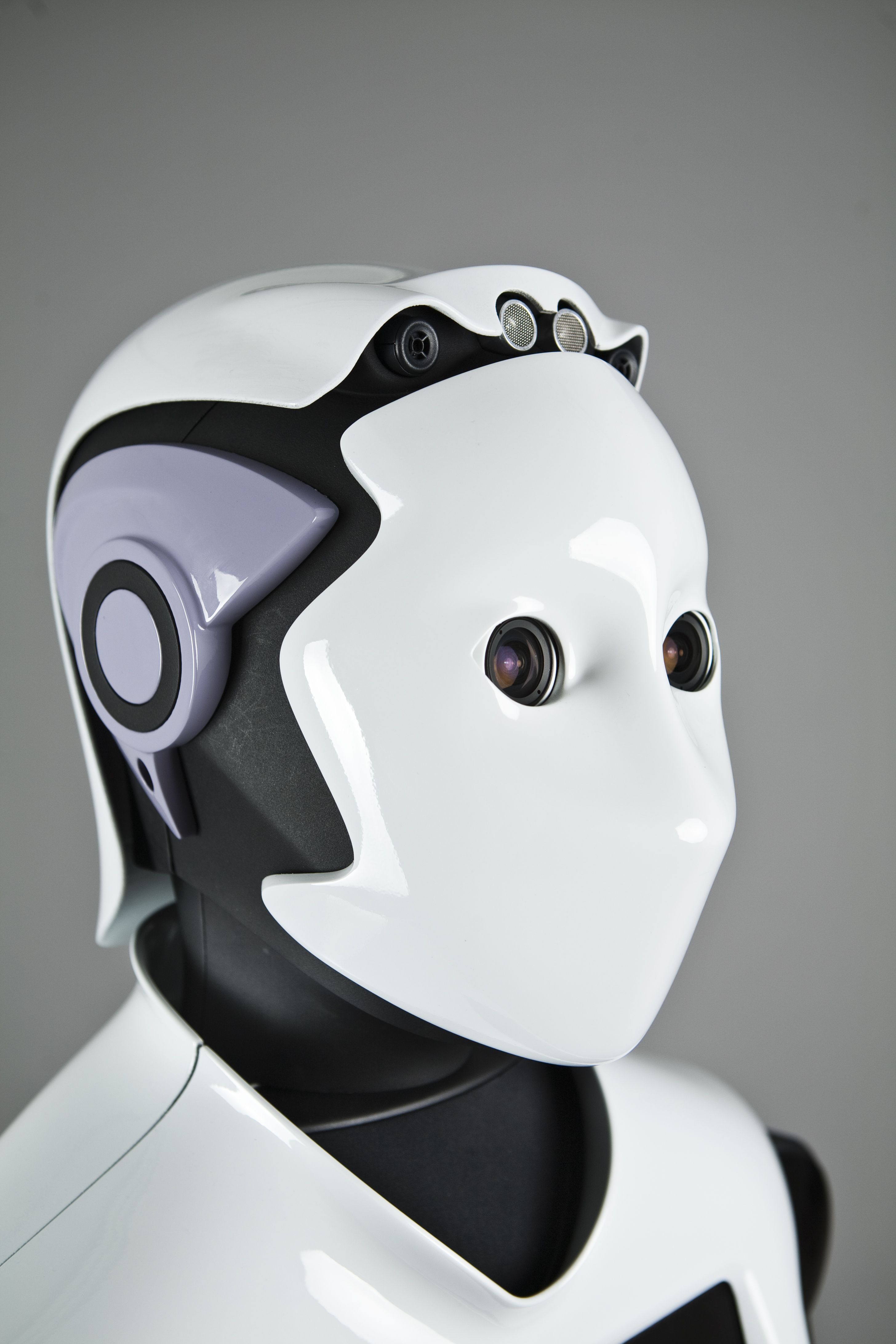 Posted at 13:40h in Features by Claire Mahoney
Timothy Compston investigates the logic of deploying robots for security and public safety

With the sight of security robots starting to patrol perimeters, shopping malls, and some police forces in the region even talking about deploying robots to supplement their existing resources, we consider how long it is going to be before they become an accepted part of security and public safety applications. Are robots likely to remain more science fiction than science fact for the time being or – with advances in sensors, processing power, and machine learning – is the future much closer than we think? What are the positives and negatives of this ‘robot revolution’?

On the policing front, robots have certainly been hitting the headlines. A case in point was the unveiling of a robot officer by Dubai Police last year for deployment at malls and tourist attractions. The robot, which was also on show at Intersec 2018, is a tailored version of the REEM model from PAL Robotics, a leader in humanoid robotics research. This solution is said to be able to navigate autonomously and has a touch screen on its chest to allow crimes to be reported and fines paid. It also features a camera that can send live images back to an operations room and can identify suspects wanted by the police. The launch of this robot officer ties in with Dubai Police’s ambitious aim to have 25% of its force comprised of robots by 2030. On this point, the force says, this does not, necessarily, mean that the number of humans will fall but rather the roll-out of robotic technology should allow police officers to be redeployed to other critical tasks.

Another robot-related development putting Dubai Police in the robotics driving seat was the signing of a deal back in June with OTSAW Digital from Singapore to become the first city to deploy a sophisticated autonomous outdoor security robot, the O-R3. When out on patrol the four-wheeled O-R3 – which is essentially a UGV (Unmanned Ground Vehicle) or small driverless car – is designed to offer the police enhanced 360-degree situational awareness to identify persons – and vehicles – of interest, and track suspects. This capability is delivered thanks to a comprehensive suite of HD and thermal cameras, facial and license plate recognition and stereo photography, and Lidar. Interestingly the O-R3 even comes with a small UAV (Unmanned Aerial Vehicle).

Hand in hand
Heading across the Atlantic, Steve Reinharz, president and ceo at California-based Robotic Assistance Devices (RAD) – a specialist in artificial intelligence and robotics – is a strong advocate of the benefits that the latest generation of robots can unlock for security applications when they work hand-in-hand with other elements.

On the question of whether such systems are a practical proposition today, rather simply a pipe- dream, he answers in the affirmative: “Absolutely. Robotic solutions armed with advanced artificial intelligence [AI] are already emerging as a major player and addition to the security marketplace with a focus on executing defined tasks.” Expanding on his point, Reinharz believes that advances in AI make it possible for integrated robotic systems to be used, effectively, to augment traditional security guards: “These [robotic] systems can leverage advanced navigation capabilities, obstacle avoidance sensors, and intelligence mechanics to streamline operations and to reduce the risk of human injury in dangerous environments.”

While Reinharz adds that nothing can substitute for human-to-human interaction, he is confident, moving forward, that the latest robots are well placed to play a prominent role across the security landscape: “Combining AI-enhanced technology with traditional security measures can radically improve functionality and help organizations reach their security goals. Robots can be implemented anywhere human guards are to bolster security efforts,” he says.

In terms of specific verticals where these robots are likely to gain the most traction, Reinharz reckons that they are well suited to the demands of critical infrastructure sites, corporate campuses, educational facilities, and other locations where there is an outdoor perimeter or wide expanse of space that needs to protection.

Of course, bringing any revolutionary approach to market is not always plain sailing. Drilling down to the barriers that Robotic Assistance Devices has had to overcome to promote robots in the security space, Reinharz admits that – in addition to building a start-up company – there has definitely been a learning curve when talking about this technology and obtaining ‘buy-in’ from customers and partners: “Luckily, with the kinds of customers that we work with, many of them see the vision of bringing robotics and AI-enabled technology to the forefront of security use cases.”

Returning to how robots are operated on the ground, Reinharz is keen to reiterate the point that AI-focused technologies enable robots to sense obstacles and avoid them while on patrol; sense the movement of foreign objects and alert security personnel to any potential breaches; navigate autonomously around a perimeter on a set path and to use pre-programmed communication tools to provide a warning if a breach occurs: “When a human is detected the robot could say: ‘Stop! The authorities have been notified!’ Of course, all these functions are programmed by humans so some intervention in the beginning is required,” explains Reinharz. He goes on to stress that security robots really come into their own as force multipliers: “They are communicating necessary information back to a security operations centre, which is being manned by a human guard or officer, who can deploy the next steps in the event of an incident or emergency,” concludes Reinharz.

For his part, Leo Ryzhenko, ceo at SMP Robotics, which developed the S5 model distributed by RAD in North America, says that a key advance – which the vendor is now implementing – is the ability for security robots to communicate not just with a control centre but, crucially, robot-to-robot: “The reality is that most early prototype robots [on the market] don’t work at all or cannot communicate [with other robots] so they are always working alone.” He says this contrasts with the joined-up thinking being implemented by SMP Robotics: “Our approach is very simple, robots must communicate with each other.”

Putting the practical benefits of operating robots as ‘a swarm’ into perspective, Ryzhenko points out that, as a starting point, all robots need to learn the routes they are going to take: “If you bring a robot to a customer’s site you have to train that robot exactly like you would train a human. You need to show it around, show it the paths. Those paths could be multiple paths for a patrol and you train the robot.”

“If you bring a robot to a customer’s site you have to train that robot exactly like you would train a human.”

Basically, according to Ryzhenko, using sensors like video cameras a robot builds-up a mathematical model of its environment, including key objects. Where things become complicated, says Ryzhenko, is in a situation like a major site, requiring perimeter protection, where there may be 10, 20 or even 30 robots deployed: “Up to now if you trained your robots you would have to train every single robot like you train every single human.” The good news, he says, is that in the robot situation everything is simplified thanks to ‘swarm’ technology: “If you train a robot and the robot already knows a patrol or an area and you turn-on a new robot to the swarm system that new robot will immediately know everything that the old robot does.”

Another advantage of deploying robots in a swarm, says Ryzhenko, comes into play should a battery run low on a particular robot, putting it out of action: “That robot can go back to the charging station and the other robots can increase the distance between them to protect that territory. If one robot goes out it does not mean that you have a big hole in protection,” says Ryzhenko. He also believes that the economics of robots – which he likens to mobile cameras – stack up when compared with the cost of protecting massive areas with traditional video surveillance measures.

Regarding where security robots are headed and if this approach signals the end of human security guards as we know them, Ryzhenko says that he does not expect this to come about in his lifetime “Right now a robot, even with all its AI, is no more intelligent than a dog. Could you replace all your human security with [guard] dogs? No. A robot is like a dog because it is always going to interact with a human security guard.” In the end Ryzhenko says that somebody needs to make a decision: “That decision maker is still a human not a robot.”

Rounding things off, with a view to the Middle East market, Ryzhenko confirms that SMP Robotics is looking for local distributors with good technical skills to cover key areas like Saudi Arabia and the UAE (including Dubai). He reiterates the point that having the right distributor in place, who can advise customers, is a critical element of the vendor’s business model as a security robot is not something where you can just press a button and it is working: “It is artificial intelligence, you have to train the robot,” says Ryzhenko.