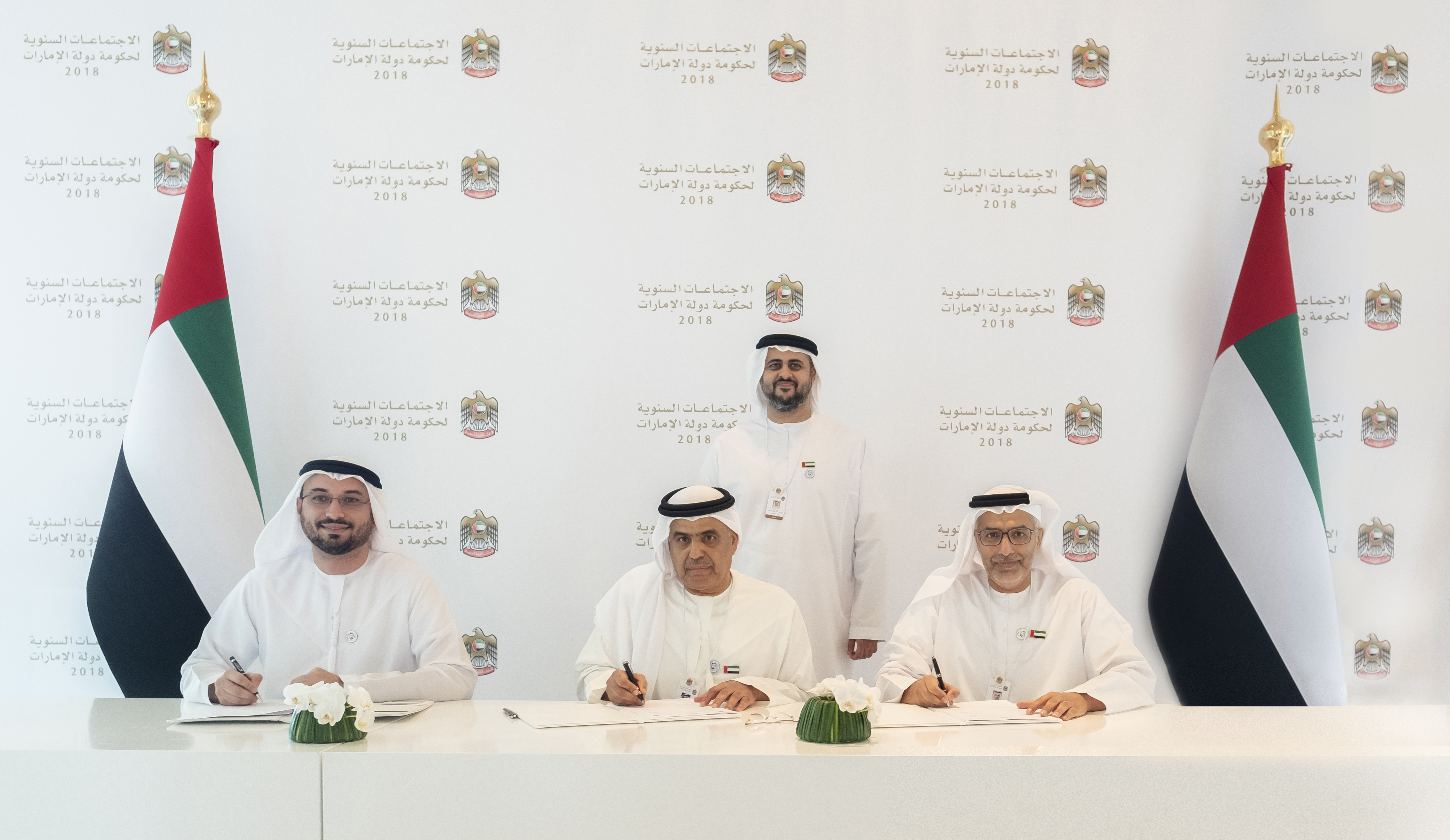 Posted at 10:39h in News by Claire Mahoney

The UAE Ministry of Finance and the Abu Dhabi Department of Finance have signed an agreement for the financing of Stage Two of the Etihad Rail national rail network.

Stage Two will extend 605 kilometers from Ghuweifat on the border with Saudi Arabia to Fujairah on the east coast, to be followed by future route additions. The volume of goods transported will increase from seven million tons per year on Stage One to more than fifty million tons.

The agreement signing ceremony was attended by His Highness Sheikh Theyab bin Mohamed bin Zayed Al Nahyan, Chairman of the Etihad Rail Board of Directors. His Excellency Obaid bin Humaid Al Tayer,Minister of State for Financial Affairs, His Excellency Riyad Abdul Rahman Al Mubarak, Head of the Abu Dhabi Department of Finance, and Etihad Rail, signed the agreement. The signing ceremony was also attended by a number of senior dignitaries, ministry officials and VIPs in the country.

The ceremony took place on the sidelines of the second annual meeting of the UAE government to discuss development topics and which aim to unify government work as a single system at federal and local level.

His Highness added that this national project is a qualitative leap and establishes a new transport sector in the UAE. “It achieves many benefits and advantages locally and internationally, connecting the emirates and linking industrial areas, boosting economic diversity and supporting economic and social development in the country.”

H.H Sheikh Theyab continued, “At Etihad Rail, we are working with a strategy to meet our mission and objectives. This project is part of our commitment to the UAE to help it achieve a leading position in transportation quality, In line with UAE Vision 2021, which aims to transform the emirate’s economy into a competitive knowledge economy by transitioning to a knowledge-based economy, promoting innovation and research and development, strengthening the regulatory framework for key sectors, and encouraging high value-adding sectors. These will improve the country’s business environment and increase its attractiveness to foreign investment. This is why the national railway network serves as a catalyst for economic growth by connecting key commercial and industrial centers and providing a safe and reliable means of transportation for future generations.”

“The company will be achieving a number of economic benefits, such as improving the transport and shipping sector in the UAE by linking ports, manufacturing and production points, and population centers. The network will help to support future growth with a sustainable, safe, modern and cost-effective transport system, as well as contribute to reducing the number of vehicles on the roads, which will yield tangible benefits from both economic and environmental perspectives. By adopting global standards, the Etihad Rail network will improve the movement of goods and people by creating new trade corridors.

Etihad Rail has taken major strides in 2018, most importantly the completion of the preliminary designs of Stage Two of the project in preparation for the launch of tenders for civil construction works by the end of this month.

In 2015, Stage One of the project, which extends 264 km, was delivered, linking the Shah and Habshan gas fields in the Al Dhafra region of Abu Dhabi to the port of Ruwais on the Arabian Gulf, with a capacity of transferring 22,000 tons of sulfur granules daily; 20 million tons have been carried in total.

Etihad Rail is now in advanced stages of commercial and technical negotiations with an extended range of potential partners.

Etihad Rail was established in June 2009 under Federal Law No. 2, with the mandate to manage the development, construction and operation of the UAE’s national freight and passenger railway network. The railway network will link the principal centres of population and industry of the UAE, and will form a vital part of the planned GCC railway network across the GCC.

Etihad Rail has successfully completed Stage One of the network.  Stage One has been operational and delivered on schedule and within budget. The route spans 264 km, transporting sulfur from sources at Shah and Habshan to the export point at Ruwais. Stage Two links the United Arab Emirates and Saudi Arabia from Fujairah to Al Ghwaifat through Mussafah, Khalifa Port and Jebel Ali Port. Built to international standards, Etihad Rail’s state-of-the-art network will span approximately 1,200 km, acting as a catalyst for economic growth and sustained social development. Upon completion, the railway will redefine logistics and transport in the region, providing a modern, safe, efficient and sustainable mode of transport that will connect all regions of the UAE to its neighbouring GCC countries.