Posted at 09:31h in Intersec by SME Magazine

Intersec 2019’s key government partners and organiser addressed media at the show’s official press conference on 16 January ahead of the show’s opening. They presented the latest developments in protecting life and assets in a Middle East market. It’s clear that demand for security, safety, and fire protection solutions will continue to climb.

Live-action firefighting, Artificial Intelligence, and Securing Expo 2020 are among the key features for Intersec 2019.

The big opening in Dubai is due to showcase live-action firefighting and emergency rescue operations, drone demonstrations, and a revamped conference discussing Artificial Intelligence. Safety planning for cities of the future, and securing the Dubai Expo 2020 are also on the bill.

The 21st edition of the world’s leading trade for security, safety, and fire protection takes place from 20-22 January 2019, with more than 1,200 exhibitors from 54 countries spanning 60,000sqm at the Dubai International Convention and Exhibition Centre.

According to analysts 6WResearch, the Middle East market for physical and perimeter security, commercial and information security, fire protection, and drones, is currently worth a combined US$14.5 billion. This is estimated to grow at a compound annual growth rate of 13.5 percent over the next six years, valuing US$31 billion in 2024.

Physical, perimeter, and commercial security, comprising monitoring and surveillance systems, restricted entry systems, access control, intrusion detection, and perimeter security, holds the lion’s share of the market, valuing US$10.8 billion in 2018, and estimated to more than double in value over the next six years to be worth US$23 billion by 2024. 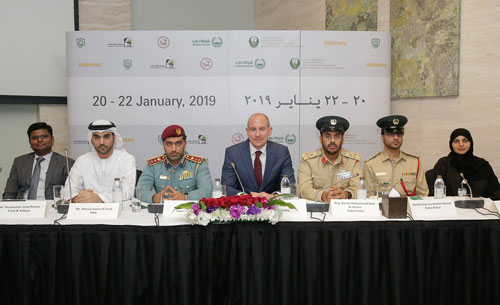 Saudi Arabia and the UAE are the key contributors, currently comprising nearly 60 percent of the market for physical, perimeter, and commercial security (US$6.48 billion), on account of favourable government regulations, infrastructure development, and adoption of new technologies across industry verticals such as retail, hospitality, banking, aviation, transport, oil & gas, and construction.

The Middle East fire safety systems and equipment market will also increase by eight percent annually says 6WResearch, valuing US$3 billion in 2024, from an estimated US$1.9 billion in 2018.  The markets for information security (from US$1.4 billion in 2018 to US$2.7 billion in 2024), and drones (US$510 million to US$2.4 billion), are also in-line for solid growth.

More information is available at: www.intersecexpo.com.