Smart ideas exchanged at the first SecurMiddleEast symposium in Dubai 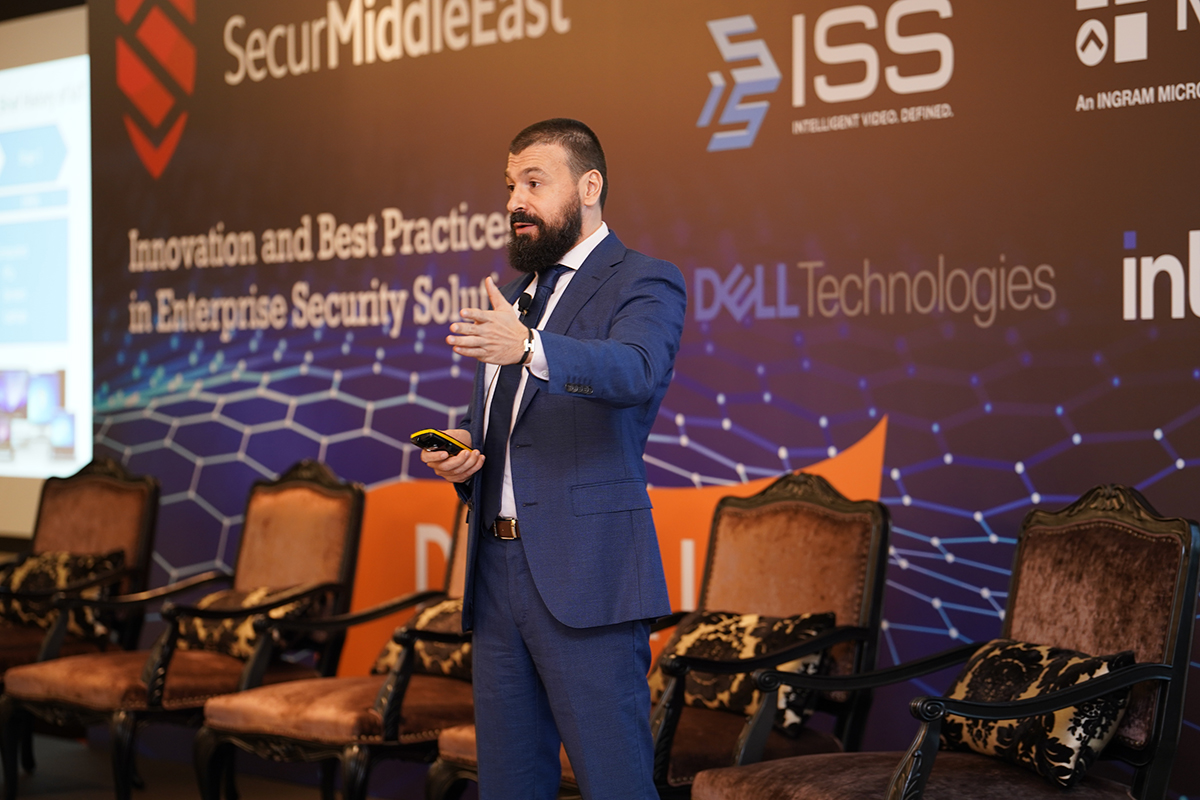 Posted at 12:08h in Features, Selected-Features by Claire Mahoney

Smart cities, AI and the Cloud were the topics that created great debate at the inaugural SecurMiddleEast symposium held at the JW Marriott Maquis Hotel in Dubai in June. SME reports

“Smart cities are no longer an option, they are a mandatory process which every city must engage in if it is to push through and compete in the economy of the 21st century.” That was over-arching message delivered in a keynote address by Alaa Dalghan, the managing director of Cognit DX, at the first SecurMiddleEast C-Suite Symposium held in Dubai in June.

He was speaking alongside several other thought leaders in the security, IoT and the smart city arena about some of the issues affecting the security industry post pandemic and how we can move forward with technology’s help.

He added that the security industry should embrace the current digital transformation and that service-providers also need to adapt to the new business models that IoT and the cloud are creating as we enter the next stage of these disruptive technologies. He emphasised that the term ‘smart’ was so much more than a buzz word or trend but an inevitable process. “A smart city is not simply a showcase,” he said, “rather it is one that is enabled and empowered by technology. We are surrounded by cities and projects that want to be smart here in the region. Lusail City in Qatar and Red Sea Project in Saudi are just two examples of cities that are engaging in a process of transformation”

He added: “It is important to remember when we talk about smart cities that it isn’t about the number of cameras or how much footage you collect. It’s about the intelligent analytics you run on top of this.” The goal,” he said, “was a combination of three types of analytics: historial analytics, realtime analytics and predictive analytics. That is how you turn raw data into actionable data.”

He gave the example of the traffic police in Abu Dhabi who are experimenting with mobile computing with intelligent analytics at the edge that is capturing the license plates of traffic moving across 12 lanes in two directions. “This means that the traffic police can see in realtime who the violators are.”

In Dubai this has been taken one step further and they have implemented mobile monitoring of traffic with onboard analytics so that fines can be issued on the spot. Similar technology is also now being applied to monitoring pedestrian behaviour – a completely preventative approach to road traffic accidents which of course are very high in the Emirate.

Proceeding with caution is of course the watchword of the security industry and that was the tone of Eng Arif Al Janahi, director of Security Engineering at SIRA’s keynote address at the symposium “Our mission is preventative security,” he said. He also had a measured approach to key technology drivers such as AI and the Cloud.

“ In my opinion AI is still not mature enough – it doesn’t give you 100% accuracy. The definition of AI for each industry is also so different and totally dependant on the people programming it. So if we are still analysing the data – as far as I’m concerned it is still analytics and not AI.”

He said that SIRA hasn’t approved the Cloud yet, partly due the security of the data being transmitted from place to place. “I know the telecommunications company will hate me for saying this, but if something is cloud-based there is no guarantee there won’t be missing a frame. When I worked in the police we used to look at things frame by frame to get the detail. But with cloud you have that information going back and for and you can’t be sure of that.”

SIRA’s role is, of course, one of an advocate for the security industry in Dubai. So Janahi also talked about the difficulties security installers and integrators face on a day today basis with project managers on the numerous building projects taking place in the Emirate.

“Project managers of the developments here in Dubai tend to think of security as a brick wall – they don’t understand that it will change down the line. Developers need to understand that security it for the long term and this is what often causes issues for the security industry as developers want to see a return within a year – but within the industry we are looking at the long term – around five or six years.”

He went on to explain that any legislative changes introduced by the government can take at least 18 months to be implemented, yet developers, once they reach the end of a project, often don’t have the time or money to put aside for security. “They want to get a return on their investment as soon as possible. So you can see the dilemma we face here. We have to consider both needs, but overall we have to consider the safety of Dubai.”

Outlining how the pandemic had affected the industry, he said the security sector that had felt the most impact was guarding, which has suffered major job losses. Security systems installers have also been affected as projects have been put on hold or cancelled and even those that haven’t’ been stalled have been victim to problems within the logistics sector.

Dr Mohammad Alketbi who is founder and managing director at Forceis Integrated Security Systems took a slightly different approach. He said that from a business perspective – believes that technology is more capable than the human factor. His talk focused on video surveillance and artificial intelligence in the UAE. “We cannot stop just because we can’t get the accuracy right. It is ok to fail and we can learn from our mistakes.”

He talked about the need for more integration and open architecture and how the combination of technologies can bring cost down. He added that edge analytics and storage would have a major role to play in this. “I understand that people are afraid of the cloud because the authorities are not sure about it but as a service provider we have to be interested in the future and the future of the UAE is based on intelligent government services and an intelligent consumer experience. SIRA has a different approach, but as a business we have to put the customer first. We have to test these technologies and find a way through as everything is possible, but only if we try.”

The event also featured a lively panel debate led Richard Burns, chairman of ISS about buzz words and the future of the security industry featuring leading defence and security expert Lewis Kenney director of Hawkesmore, Fredy ISSA who fronts to entire surveillance and IOT Businesses at Dell Technologies in the MERAT region and Aluisio Figueiredo CEO of ISS.

For more details and to watch all of the the speeches visit: www.securmiddleeast.com