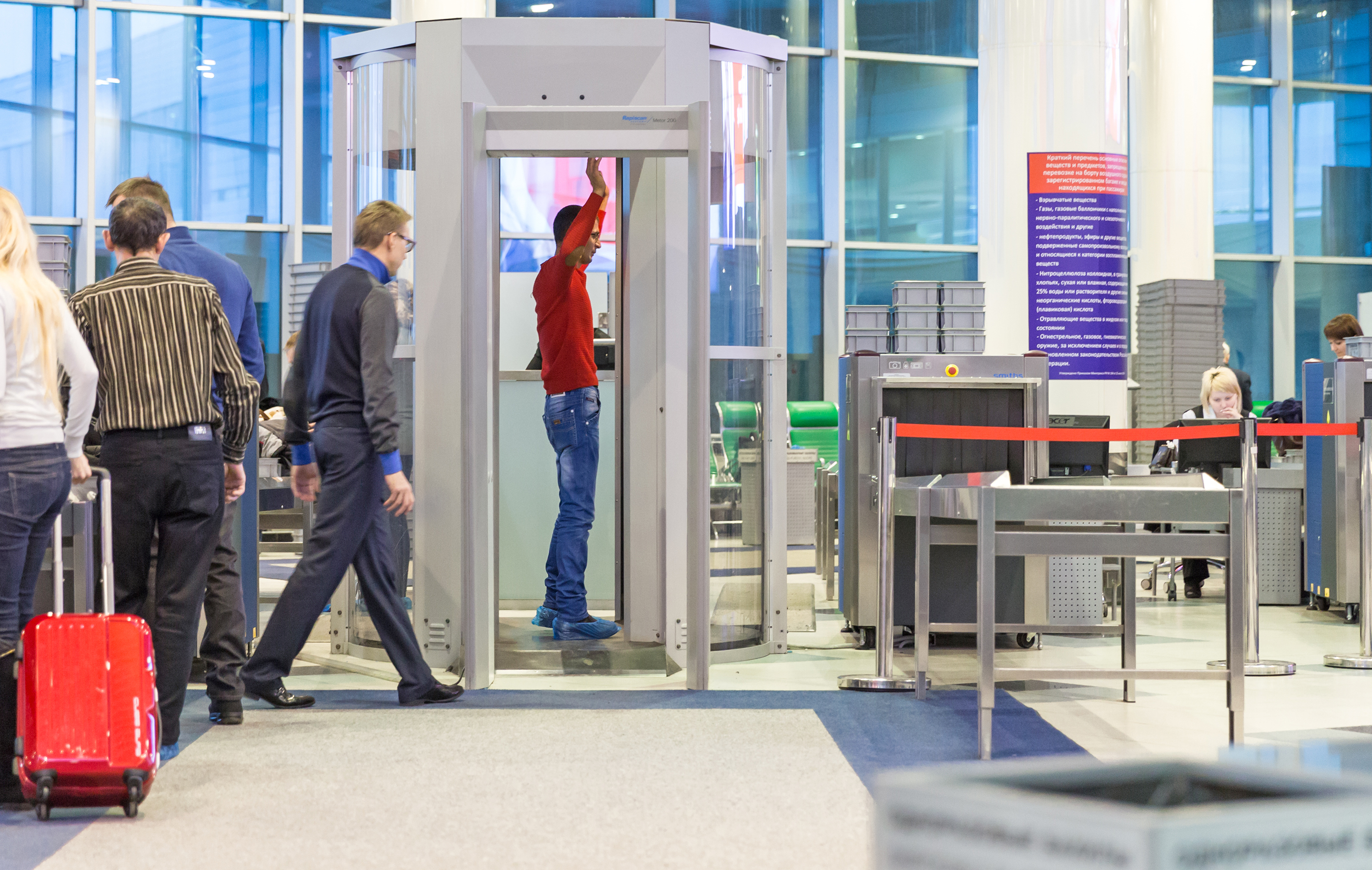 Posted at 14:24h in Features, News by Claire Mahoney

With the volume of passengers going through airports soaring at a prodigious rate and the ever-present threat of terrorism, operators are having to face-up to the challenge of implementing the right level of security while maintaining a smooth flow of passengers to the departure gates.

To put the sheer scale of this challenge into some sort of perspective, the International Air Transport Association (IATA) reports that in 2017 airlines across the globe carried 4.1 billion passengers on scheduled services – a growth of 7.3 percent year-on-year – of which the Middle East accounted for 216.1 million passengers or 5.3 percent of the total market. Here we take a closer look at the latest technology, and operational steps, that are now being employed by airports to screen this high volume of passengers – and their bags – between landside and airside to ensure that nothing untoward makes it on to an aircraft.

Over the past fifty years, the aviation security landscape has been shaped by a series of high profile incidents including: hijackings and bombings, failed attempts, and timely arrests by the authorities, all of which have thrown-up new intelligence on the modus operandi of the attackers. A case in point was the widespread deployment of metal detectors at airports as a direct response to a series of hijackings with weapons in the 1970s. Fast forward to the Lockerbie air disaster in 1988, which saw Pan Am Flight 103 destroyed over Scotland by a bomb hidden in a radio cassette player, and one of the most significant outcomes of this tragedy was the roll-out of 100 percent hold baggage screening. Since then there has been an ongoing technology upgrade path by vendors as the materials requiring detection have continued to change.

At the start of this century the 9/11 attacks which saw four planes being hijacked by terrorists – with two then being flown into the Twin Towers of the World Trade Center in New York and another hitting the Pentagon in Washington DC – sent shock waves through the aviation world and not surprisingly, there was a subsequent ramping up of airport security measures worldwide. In the US, specifically, an agency – the TSA (Transportation Security Administration) – was created, to confront persistent and evolving threats. As a result – alongside changes such as passengers being vetted against government watchlists – there has been a major expansion in the deployment of Advanced Imaging Technology (AIT) with automated target recognition software to detect both metallic and non-metallic threats, including explosives.

Sadly, more than a decade-and-a-half on – the threat to aircraft – and their passengers – has not gone away. Here in the Middle East, three years ago this month (October), we witnessed an A321 Russian airliner breaking up over Sinai shortly after it took off from Sharm El Sheikh airport in Egypt, killing all 224 people on board. After much conjecture by mid-November of 2015 the chief of Russia’s security services (FSB) – Alexander Bortnikov – confirmed that traces of explosives had been found in the plane’s debris. He suggested that a bomb, of up to 1kg of TNT, had been smuggled on board causing the plane to break apart in mid-air.

As mentioned, it is not just the incidents which result in the loss of an aircraft and multiple fatalities that are having an impact on security; plots and failed attempts are shaping subsequent security measures. Consequently, there is now a greater focus on electronic devices, liquids/gels, powders and footwear. The action of the so-called shoe bomber Richard Reid who attempted to detonate plastic explosives in his shoes on an American Airlines flight in December 2001, for example, caused passengers to then be routinely asked to remove their shoes and place them in trays for scanning. Another failed plot, this time in 2006, involving liquid explosives in drinks bottles on flights from the UK to the US, resulted in the volume of liquids and gels that can be carried by passengers being limited to 100 ml – in many jurisdictions – with these too having to be taken out of carry-on luggage for closer inspection. The security threats the aviation industry faces are dynamic and this summer new powder restrictions were in the news when the Australian Government announced that it was enforcing limits on powder products – specifically the inorganic variety like talcum powder – in carry-on baggage for overseas flights, a step, interestingly, that the TSA (Transportation Security Administration) in the US is also implementing. The catalyst for the change was, reportedly, a plan, that fortunately did not come to fruition, by individuals based in Australia to blow up a plane flying from Sydney to Abu Dhabi last year.

In terms of the course being navigated for airport security by the leading technology vendors we have witnessed more and more advanced solutions being brought to market in recent times. When it comes to the screening of carry-on baggage, back in May, Smiths Detection – a global leader in threat detection and screening technologies – showcased its new HI-SCAN 6040 CTiX solution at the Airport Show in Dubai. According to Smiths Detection the HI-SCAN 6040 CTiX checkpoint scanner is the first solution of its kind to feature the company’s proprietary CT (Computed Tomography) scanning technology. When deployed, the cutting-edge checkpoint scanner is designed to generate high resolution and exceptionally accurate 3D and 2D images thus, potentially, eliminating the need to remove electronics and liquids from hand luggage so improving the passenger experience. Reducing the number of trays required per passenger, combined with a 0.2m/s belt speed and low false alarm rate, should, reckons Smiths Detection, allow airports to significantly speed-up checkpoint throughput. This is certainly good news for airport operators given the pressures they are under to move more passengers, on more flights, than ever before.

Beyond this, at the Airport Show, Smiths Detection confirmed that there are planned enhancements in the works for the HI-SCAN 6040 CTiX including: the automatic detection of prohibited items such as guns, and large knives. The hope is that these additional capabilities will mean that operators will no longer need to review every image. Putting the latest advances into a wider context, Tom Squier, managing director of Smiths Detection in the Middle East, says that ‘making travel simpler and safer for passengers’ is the foundation of the vendor’s efforts around ‘threat identification’.

Turning to the direction of travel for those working on the frontline, over in the US it was announced this August that a Transportation Security Administration checkpoint at (BWI) Baltimore Washington International-Thurgood Marshall Airport was adding an extra dimension to security by testing a computed tomography (CT) scanner. This is part of a wider programme involving several manufacturers of CT checkpoint technology scanners who, initially, are providing 15 devices for testing at airports across the United States. The system at BWI is applying sophisticated algorithms for the detection of explosives by creating a 3-D image that can be viewed and rotated on three axes for thorough visual image analysis by a TSA officer. Interestingly, passengers using this machine at BWI airport are to be permitted to leave laptops and other electronic devices in their carry-on bags. Commenting on the rationale for this deployment, TSA administrator David Pekoske said: “TSA is committed in getting the best technology to enhance security and improve the screening experience. Use of CT technology substantially improves TSA’s threat detection capability at the checkpoint.”

Across the Atlantic, London’s Heathrow airport too is trialling new CT scanners as part of a Department for Transport (DfT) initiative. Depending on how the trials go in future it may even be possible for the rules to be changed to allow passengers to forgo having to remove liquids and other items from their hand luggage, although the DfT is keen to stress that we are not at that point just yet.

One aspect of airport security that has proved controversial due to privacy issues, especially when they first appeared, are full-body scanners – that can highlight objects under clothing – and to date some airports in the Middle East region like Dubai International Airport have ruled out their use. Despite these early hiccups the global airport full-body scanner market is projected by MarketsandMarkets to grow to US$ 118.2 million from US$79.0 million in 2016 driven by the need for more international airports, increasing passenger traffic, and stringent security measures to combat terrorist activities. In terms of the technologies at the forefront here, it is the millimetre wave scanner segment that MarketsandMarkets expects to grow at the fastest rate and within this, passive scanner solutions are predicted to have a larger share than the active scanner variety. Added to this over the past few years significant steps have been taken to address privacy worries. A good example of the shape of today’s full-body scanners is the compact ProVision 2 from L3 Security and Detection Systems. This image-free people scanner relies on millimetre radio wave (MMW) technology rather than X-rays or any ionizing radiation. Software algorithms identify objects, threats, or contraband and, crucially, results are shown on a generic mannequin which is the same for every person.