Reaching through the red tape 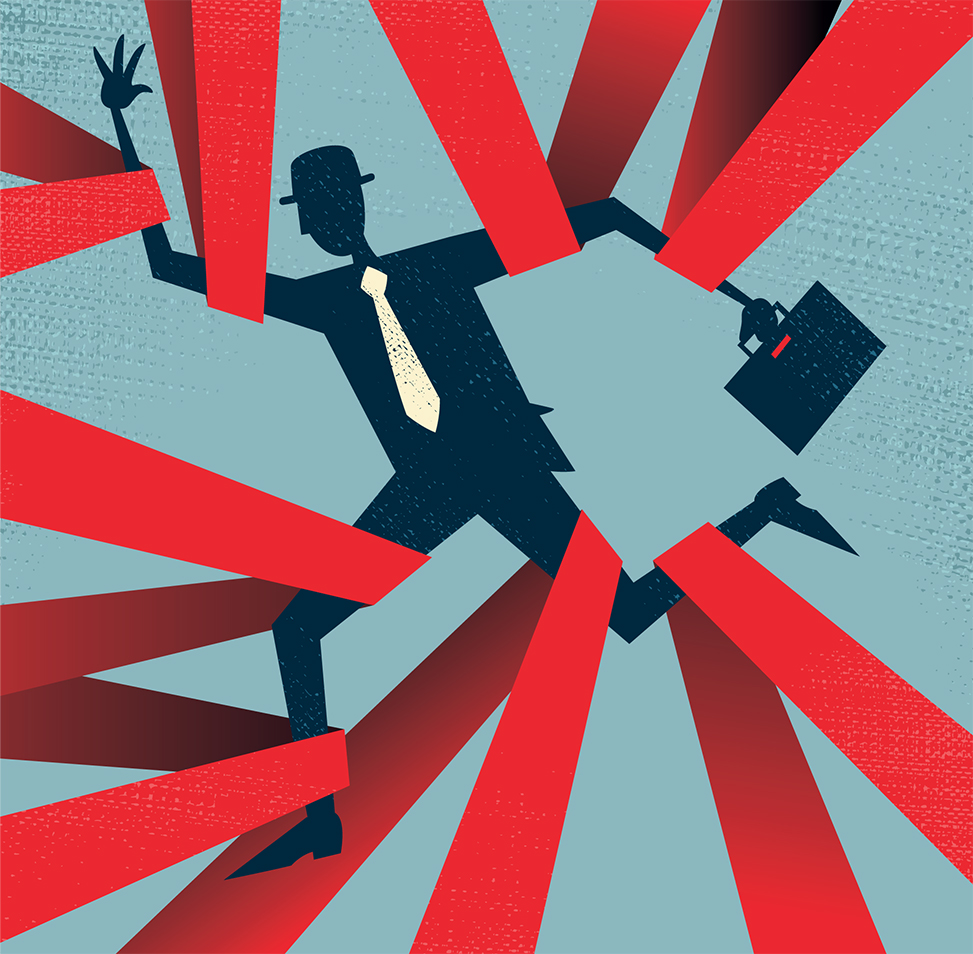 20 Jul Reaching through the red tape

Posted at 13:40h in Features by Claire Mahoney

When discussing regulations in the context of video surveillance solutions there are several factors which come into play. For example, we are seeing a domino effect as authorities in some territories in the Middle East move to stipulate specific recording periods for CCTV, and ever higher camera resolutions and then at a wider level make video surveillance cameras mandatory for certain applications. In this article we look at the requirements that are making a difference to how security cameras and the associated infrastructure is being specified and deployed and, crucially, what vendors are having to do to help their customers meet this challenge.

Taking a closer look at the regulatory environment for video surveillance across the Middle East, Ettiene Van Der Watt, regional engineering and training manager – Middle East and Africa – at Axis, provides a helpful overview of the current requirements in different territories. According to Van Der Watt, for Dubai the SIRA (Security Industry Regulatory Agency) has been updating the regulations in the last year requiring higher resolution and more details. To achieve this, he says that they have now set two megapixels as the minimum resolution for cameras with 31 days retention for the associated footage. Also, in the UAE, for Abu Dhabi – where regulation is the responsibility of the ADMCC – Van Der Watt points out that under the latest V5.0 standard all cameras must be IP and at least two megapixels with retention times of up to a maximum of 180 days.

Where Saudi Arabia is concerned, he says that under new regulations from the Ministry of the Interior, like other parts of the Middle East, two-megapixel IP cameras are specified as a starting point. Another consideration here, points out Van Der Watt, is the HCIS (High Commission for Industrial Security) regulation for critical infrastructure that users need to comply with. In Kuwait, where like Saudi, the Ministry of the Interior regulates, there is a higher resolution requirement of three megapixels for all cameras, except, explains Van Der Watt, PTZ models. He adds that retention times are also on the high side in Kuwait at 120 days at 15 frames per second.

Offering his thoughts on the path that regulation for video surveillance has taken in the region, Walter Candelu, head of sales and business development for electronic security solutions at G4S UAE, says that in the recent years, municipalities and police departments in the UAE – and across the region – have implemented considerable improvements in surveillance regulations in terms of coverage, footage retention, and the resilience of the overall design architecture: “With this rapid, but positive, evolution of industry standards and regulations, end users have started to benefit from better picture quality and more reliable Video Surveillance Systems (VSS).” Expanding on the practical ramifications of the race to regulation he agrees that with higher standards and quality comes a higher cost, however Candelu contends that, ultimately, the advantages outweigh the cost elements.

So, what can security solutions providers do to help their customers who are faced with such a challenging regulatory landscape? Well, Candelu believes that, a consultative approach such as that adopted by G4S makes sense as it can aim to reduce the total cost of ownership for customers: “For example, selecting the right camera model with optimised bandwidth consumption reduces the network utilisation and the storage requirements or, similarly, selecting the right video management software [VMS] permits a reduction in the number of servers without compromising performance.”

For his part, Christian Ringler director for Middle East, Africa and DACH at Milestone Systems welcomes regulations we are seeing in the region: “I think that it is good that these countries have regulations because they are also designing to a very high standard and a very high quality.” He confirms that Milestone keeps a watchful eye on the latest regulatory requirements: “We are in close contact with the regulation offices in the UAE and other countries. It is a regular process that we are always looking into our products and what are the regulations and how compliant our products are to the regulations and consider that in our roadmap planning.”

Asked about any obstacles that Axis as a vendor has had to overcome, in light of Middle East regulations, Ettiene Van Der Watt – regional engineering and training manager – explains that one hurdle along the way was ensuring an understanding, and acceptance, of compression technologies like Axis Zipstream: “The reason for mentioning this is that most authorities require long retention periods for recorded video and Zipstream was introduced to lower storage and bandwidth costs.”

Still on the implications for storage and how compression technology can help, Jamil Alasfar, senior sales manager, IDIS MENA office, agrees that the big challenge when you increase the resolution and the recording days is storage: “In my experience, storage is a big chunk of cost in any surveillance solution. That’s why we started last year promoting the H.265 IDIS Intelligent Codec to reduce this cost on the end users. When you are using H.265 plus the Intelligent Codec from IDIS you are reducing the storage between 65 and 90 per cent.” Alasfar adds that IDIS has opted for a hybrid system architecture: “The end user can decide to record on H.265 plus IDIS Intelligent Codec but can still live view in H.264 using legacy systems like computers for VMS and CMS. I think that this is the major point because you know cost is the major driver right now in the Middle East.”

Drilling down into more of the specifics of what vendors have been up to on the ground, in light of changing regulations, and how this is influencing the Middle East market’s dynamics, Josh Woodhouse, senior market analyst for Video Surveillance at IHS Markit, points to one specific example: “What some vendors have been doing to meet local demands is enterprise storage. We do observe, proportionally, a large market for enterprise storage systems specifically for video surveillance in the Middle East. These storage systems are required to comply with some of the stringent video retention requirements in certain verticals and countries. In some of the larger projects due to regulations video footage from hundreds or thousands of networked high-resolution cameras needs to be kept for long-periods of time.”

Woodhouse notes that, due to the scale and size of storage, often an external storage system such as SAN (Storage Area Network) or NAS (Network Attached Storage) is required: “It’s in these scenarios we see some of the best evidence for the convergence of IT and electronic physical security. Both IT and surveillance vendors and integrators are working together to ensure solutions have been validated and certified to perform with other vendors cameras and VMS platforms to adhere to the regulations and provide high performance and reliability.”

Sanjit Bardhan, Vice President – EMEA, RCIS, and the Indian Subcontinent at Arecont Vision, says that as the requirements in the Middle East developed the vendor was well placed, over the past decade – or more, to satisfy the drive for higher resolution: “The market started moving towards megapixel technology, in terms of resolution, and Arecont Vision was one of the first to have this kind of technology so we were well recognised and very successful in those early days.”

Looking to the future, Bardhan reckons that, from discussions with regulators about new standards in the works, pixel density rather than camera resolution is likely to gain more traction: “In 2018 it is not just going to be about resolution, it is going to be about the most important thing that is required in surveillance which is basically, what do you want to see? Do you want to see the face of a person at 50 metres away? Well in that case use a higher resolution camera or do you just want general movement? If it is general movement put in a standard 1080p camera.”

In terms of specific projects where vendors have supplied solutions to satisfy the latest Middle East requirements, leading Qatari retail chain Al Sulaiman Jewellers has deployed IDIS technology to upgrade its network surveillance system and to comply with rigorous government security standards. Under regulations implemented by the Security Systems Department of the Ministry of the Interior (SSD-MOI), businesses, including gold retailers, are required to install advanced measures including IP CCTV systems.

Al Sulaiman Jewellers, with 18 branches employing more than 150 specialists, is one of the country’s leading names in high-end gold jewellery, gem stones, watches, pearls and designs. The integrator, A4S, identified IDIS as the best partner to work with for the project. All the chosen equipment, including the IDIS cameras, NVR recorders, hard disks, monitors and video management system (VMS) were quickly approved through the SSD-MOI online process.

The system design ensures that cameras cover critical areas, as required, with facial recognition covering all entrances. More than 40 cameras provide complete coverage of the showroom, with a combination of two-megapixel and three-megapixel IR domes and a five-megapixel fisheye camera, the latter being specified by Al Sulaiman as an addition to the mandated system.

For other areas, including offices, the rooftop, the basement, vehicle access points and the perimeter, a further 60 IR cameras, including domes and bullet cameras, are deployed. Network connectivity is ensured with an IDIS 28-Port and 24-Port POE gigabit switch and storage is handled by the IDIS NVR together with expansion storage equipment. The system is configured with RAID 5 to record 24/7 for 120 days, as required by SSD-MOI.