Posted at 14:10h in Features by SME Magazine 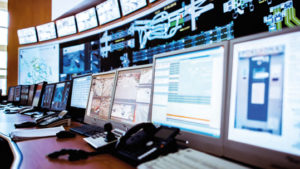 In the Middle East the CCTV purchasing trend over the last few months has been an encouraging one, according to leading manufacturers who are predicting a buoyant market for the next year at least. Whereas the focus, until relatively recently, was on price now there is a definite emphasis on performance.

Good technology is being specified over cheap technology in the expectation that it will prove to be more effective and better value over its lifetime. Philip Antonio, Mobotix’s sales director for the region, says specifiers now are looking for both reliability and innovation in cameras, more than they were even just three or four years ago.

“The market went through a period where customers were looking for low end solutions to meet budgets and therefore they were prioritising short term price over long term performance. But as the reliability and performance of those cheaper systems proved not to be so good security planners found that the lifetime cost of what they installed was actually higher than if they’d invested more in the first place.”

The shift in demand to cameras that work better and last longer has been driven by a number of factors, including greater expectation and insistence on quality from authorities across the region, he says, as well as a sharper awareness of emerging threats to systems themselves in the form of hacking.

Ettiene Van Der Watt of Axis agrees. As the company’s regional engineering & training manager he also says that customers are looking for improved value through strategic purchasing- moving away from installing cameras for the sake of it, or going for a one-size­fits-all approach and instead focusing on definite outcomes from specific camera capabilities.

He says that these days most customers are prioritising higher image quality with better usability and reduced storage. They also want better low light and WDR performance. And there is growing demand for cameras that cope well in extreme and challenging weather conditions and perform robustly in areas where vandalism is a problem.

But perhaps the most far reaching trend is the focus on edge analytics, where he says demand is also high. “It is the ability to select an application and upload it to your camera which enables data mining and using cameras beyond traditional security requirements. These would include features such as license plate recognition, people counting, queue management, facial recognition, perimeter analytics such as detecting cars, people and loitering, and sound analytics such as shouting etc.”

Looking at future threats, Phillip Antoniou of Mobotix says customers are specifying high standards of reliability and systems that are more secure so that they can’t be hacked.

“They are asking how secure the system is, not just from a network point of view but in terms of the actual CCTV system itself.”

Greater awareness of security risks among government buyers -which also influences the wider market – is a very positive development he believes. “Looking back two or three years the requirements in tenders were less demanding. Lower frame rates and lower resolution were accepted and not many people thought about hacking as a serious threat. But now there is much more awareness of the importance of image quality, functionality and security of the system itself.

Systems here are leap-frogging a technology generation in a big way, in terms of quality and capability. Various authorities in the GCC have insisted on these higher benchmarks and the market has responded. The multinational consultants that we work with know the business and know what they are doing. They are specifying truly high end solutions, not copying old tenders from five years ago to cut costs.”

He says that the most recent technology advances from Mobotix is its low-light Moonlight technology, now in-built as standard in all its cameras. Also the development thermal imaging will be the company’s focus as it talks to customers across the region in the coming year. The latter is particularly interesting because Mobotix sees the market for thermal cameras expanding beyond the long established border security and perimeter applications, into new areas such as manufacturing and safety.

In 2014 the company introduced a new range of cameras combining thermal and optical sensors. These can operate in optical mode by day and thermal mode by night (or vice versa in some situations) and deliver extra detail and information. “The ability to detect heat from any direction has applications in many areas, most obviously manufacturing, and we are seeing more demand in the Middle East market. We will be pushing it hard in 2017 because the market interest is there.”

Meanwhile the Mobotix 6MP cameras, incorporating the company’s Moonlight technology, deliver an increase of light sensitivity of more than 100-times compared with the previous generation 3MP cameras. The monochrome version reaches even a 300-times higher sensitivity than the previous series. Instead of one full second of exposure time the 6MP systems can select only 1/100 s which results in capturing even fast moving objects in low light conditions.

This increase in light sensitivity has been achieved by incorporating a wider sensor with bigger pixels to catch more light, a hardware noise reduction filter directly at the sensor, an improved lens with better light transmission, and better image processing software to further reduce the noise of low light images. “We’ve made considerable investments in pushing forward the capabilities of our cameras and the Middle East is now one of the best markets globally for proving the value of this innovation.”

Ettiene Van Der Watt of Axis also highlights the importance of integration between cross functional devices (like loT infrastructures) and predicts that these will be a key feature in the coming years, requiring a higher level of security for cameras as well connected devices.

“End customers are also looking for a higher ROI while adapting the latest advances in network cameras and IP surveillance.”

Perfect examples of multi-sensor smart cameras, with one unit covering a large area with a 180 or 360 degree overview or a combination of overviews and close ups include the AXIS Q37 and AXIS P3707-PE network cameras. “These cameras are extremely cost effective, easy to install, weather protected and have long-term usability.”

The AXIS P3707-PE comprises four camera heads that can be repositioned along a circular track to point in the desired viewing direction. Each camera head can be individually tilted and adjusted to provide a 108°-54° horizontal field of view for either wide or zoomed-in views. The camera heads can be rotated to support Axis’ Corridor Format for optimal coverage of vertically oriented scenes. A specially designed clear cover, with no sharp edges, allows for undistorted views in all directions. The AXIS P3707-PE supports individually configurable video streams for each camera head, as well as quad-view streaming, enabling 1080p resolution videos at 12.5/15 frames per second and 720p videos at full frame rate.

Both the AXIS P3707-PE and the AXIS Q3708-PVE are accessible through a single IP address. This means only one video management software license is needed with many video management systems (VMS). Both cameras also support Power over Ethernet and Axis’ Zipstream technology for reduced bandwidth and storage requirements.