No compromise at the perimeter

Home > Features  > No compromise at the perimeter 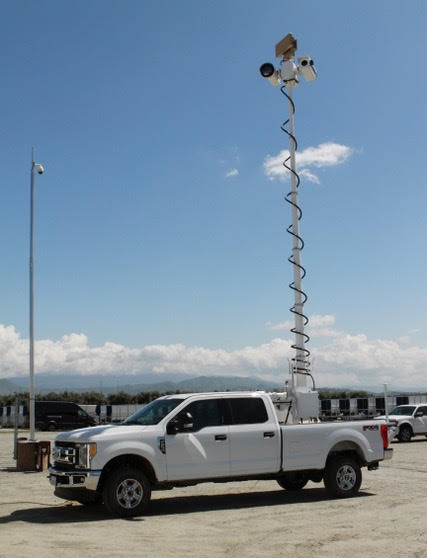 31 Jul No compromise at the perimeter

Posted at 09:17h in Features by Claire Mahoney

Mobile surveillance solutions sometimes result in a compromise in detection performance and accuracy. But as Eric Olson explains, a new integrated sensor approach means that they no longer have to

Perimeters are getting more and more complicated to defend, and at the same time, security budgets are not increasing to allow for added manpower or equipment. One solution to this problem is the use of mobile surveillance platforms.

These platforms, typically truck- or trailer-based, provide increased surveillance during critical times and allow flexible incident response, without the large infrastructure costs and time required to install a complete fixed sensor perimeter. In response to this need, security technology companies are implementing an integrated sensor approach to ensure there is no compromise when these mobile platforms are compared to traditional fixed sensor systems. This includes detection performance, sensor accuracy and response capability.

The ability to be ‘mobile’ mandates the ability to move to various locations, often via rugged terrain; quick set up on non-level locations; easy stowage; independent power; and connectivity to other platforms and users. A recent entry into the mobile platform market, the ALERT Truck, uses an off-road truck chassis coupled with a self-levelling mast to provide the foundation for a surveillance platform that is rapidly deployable in a wide range of challenging environments, including deployments at extreme terrain angles.

Critical to the success of mobile platforms, the system eliminates the need for calibration. A touch of a button deploys the ALERT Self Leveling Tower mast by U.S. Towers, which is able to automatically tilt, level, extend and be fully operative in less than two minutes. The surveillance suite, which can also self-calibrate, includes multiple sensors (SR HawkTM ground surveillance radar by SRC Inc, Night Hawk thermal/visible camera suite by PVP Advanced Electro-Optical systems, Inc, geospatial video analytics by PureTech Systems, laser range finder and GPS), as well as a complete command and control VMS software integrated into a mobile vehicle platform.

However, rapid deployment is only part of the problem. A mobile platform must be able to provide the same wealth of detection data as fixed sensors, without sacrificing accuracy or incident response capability. In the case of the ALERT Truck, this is achieved by integrating commercially available sensors into a fully-collaborative, intelligent system. This integration goes beyond a single control and data display interface, allowing the sensors to collaborate information related to intruders or Items of Interest (IOI). This ability to share data improves the accuracy of detection, increases associated details assigned to each target, reduces false alarms and de-clutters the user interface.

The unique approach used to easily and accurately combine the platform’s sensor data is the sharing and collaboration through the use of a common operating picture, mainly a physical coordinate system. A “geospatial” or location-based design adds latitude, longitude and elevation data to all IOIs, as well as sensor control and target display data. This result is an effective means for all detection sensors on the mobile suite to communicate sensor information and target details using a common geospatial command set.

Furthermore, when traditional alarm information (aka ‘time’ and ‘target’) is shared in real time with location information, this allows the system to calculate many additional attributes of the target, including real size, real location, current speed, current direction, past location, object classification and even acceleration. All this target information can be analyzed and compared amongst the various sensors to provide a highly accurate data set for each IOI.

In addition to collaborating target data when raising alarms, a geospatial user interface, such as the PureTech Systems’ PureActivTM Command & Control featured in the ALERT Truck suite, provides a visual means to quickly assess a situation in a simple map-based interface, including the merging of track data obtained from several sensors into a single cond- ensed track. This provides the most accurate representation of the IOI and its path, without confusing the operator with multiple sensor tracks from overlapping sensor coverage that may represent the same target.

The display of sensor location, sensor state and target information on a map-based GUI is only part of the advantages provided by a geospatial system. Sensors typically used for event interrogation (e.g PTZ cameras) can also be enabled to be geospatial, allowing them to be monitored and controlled using latitude and longitude information. In addition to dynamically displaying the details of a detected IOI, a geospatial system can use these same tracks as cues to point interrogation sensors directly to the location of the security event.

The operator can merely click on the target, or its location on the map, and the camera will automatically steer to the target – adjusting its pan, tilt and zoom for optimal viewing. This is especially helpful in a mobile platform, where it may not be unusual for the platform to be manned by a single operator.

This common geospatial reference system also facilitates the ability for the system to automate many tasks that previously required operator control, common detection scenario can be fully automated:

. The software steers IR and/or visible cameras to that target’s location for identification

.The operator tags the target as friend or foe, storing the classification in the system

. Target information is collected and correlated from all sensors, then communicated with the entire response team.

Although applicable to a variety of deployments, mobile platforms are widely used for border surveillance. These deployments call for long range detection and accuracies.

To further ensure that the mobile suite performs at or above the levels of its fixed counterparts, even at these extended ranges, range finders combined with high precision camera gimbles are added to provide an additional level of performance. Manoeuvring a camera at ranges over five miles dictates not only extremely accurate detection sensors (radar + video analytics), but also requires precision pointing accuracy to steer a camera to the location, and advanced control algorithms to follow this target through micro-size camera movements.

This added precision is accomplished through the addition of a range finder, which collaboratives with the radar and geospatial video analytics to compute accurate distance to a target, which in turn increases the confidence levels in corresponding data – location, target size, target speed, target track, etc.

The ability to then obtain visual confirmation of the target, via a slew to cue of the camera and subsequent auto tracking, is enabled by highly accurate position encoders integrated with the cameras, which provide positioning up to 0.0006°.

Today’s surveillance needs have moved beyond the traditional fixed camera on a fence line. Sensors need to be smart, easy to set up, collaborative and able to move rapidly as threats move. The ALERT Truck system is an excellent example of how this can be achieved cost effectively in a single platform by leveraging geospatial technology with intelligent video, radar, precision distance and highly accurate cameras to create a mobile surveillance platform that delivers the same, or higher, detection capability and accuracy as its fixed location sensor brethren.

. Eric Olson is vice president of marketing at US-based video analytics developer PureTech Systems. You can contact him by email at eric.olson@puretechsystems.com or via twitter @puretechsystems.