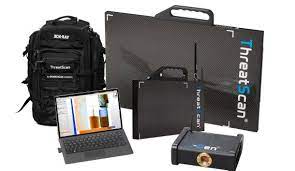 3DX-Ray has announced a contract for the sale of a ThreatScan– LS1 x-ray scanner system to the German Customs Service. This portable flat screen scanner allows border officers to inspect vehicle tyres, fuel tanks, doors and other internal spaces within a vehicle, without having to gain access to that vehicle.

Each system consists of a portable I-Gen x-ray generator, a detection panel and an operator’s workstation running 3DX-Ray’s market-leading image processing software. The advantage of the I-Gen generator used in the ThreatScan system is that it has 360 degrees of rotation, on an adjustable stand and rubber feet, meaning the operator is able to place the I-Gen on any horizontal surface of a vehicle or trailer and change the angle of the scan.

It has a large imaging area of 600 x 460mm, enabling large areas to be scanned and can penetrate up to 34mm of steel at 120kV while producing high quality, sub-millimetre resolution images. It can also be used to inspect suspect bags and packages in border transit areas, such as ports, rail and bus stations, airports and vehicle check points. 3DX-RAY sales and marketing director, Vincent Deery says: “Border agencies are increasingly realising the power and versatility of these systems and we are seeing a growing number of enquiries from border agencies worldwide”.