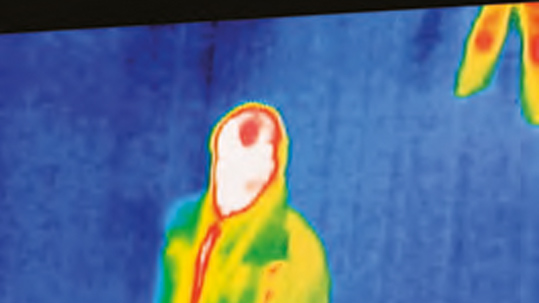 Posted at 08:54h in Features by SME Magazine

Thermal imaging cameras are widely regarded as one of the best tools for enhanced perimeter security and, with advantages including performance, reliability and cost-effectiveness over extensive areas, they are being increasingly used to give early warning of attempted incursions into secure zones.

Unlike day/night cameras, which use the near-infra red spectrum of light, thermal cameras don’t require light to operate. Instead, they detect potential threats such as people and vehicles by visualizing the thermal radiation they emit. 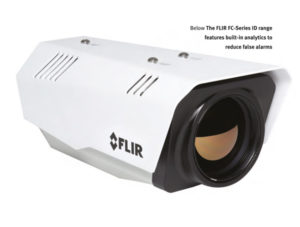 Although thermal units are not designed to allow the identification of individuals in the way that visual cameras are (still, they can see a surprising amount of detail), they are excellent at highlighting threats. They reveal things which are hard or impossible for the human eye, or visual cameras, to pick up on. And unlike conventional CCTV, thermal cameras are not hampered at all by smoke or changing light conditions.

Effectiveness at distance
Their effectiveness starts a long way out, with the detection of targets delivered in all lighting conditions, and regardless of undergrowth and similar cover. A typical application is in border security, where they easily achieve a 2km surveillance range, allowing 4km spacing between cameras. Closer in, and the thermal camera will clearly show what the target object is -a person, a group of people, a vehicle etc. Closer still and clear details are revealed, showing what the person is doing.

This provides all the necessary information for the appropriate response to be triggered -whether that be continued remote monitoring (directing visual CCTV cameras to the target areas, for example) remote warnings, or direct intervention.

A thermal camera is less sensitive to problems with light conditions, such as shadows, backlight, and of course darkness, points out leading manufacturer Axis, and is not fooled by camouflage or bright sunlight.

Whilst the image quality of a thermal camera is still dependent on weather conditions – it will be affected to some degree by rain, fog and air pollution -the same applies to conventional visual cameras.

False alarms
‘Visual cameras are often subject to false alarms caused for example by branches moving in the wind, headlights from cars, or simply a plastic bag flying by,’ says Axis. ‘Thermal cameras, on the other hand, can provide more reliable detection and recognition by adding image intensity to motion detection.’ 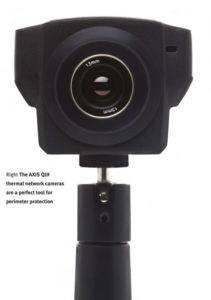 Modern thermal network cameras are very sensitive and accurate, the company argues, and their high detection performance makes them ideal in a first line of defence such as on a perimeter. A

XIS offers its Q19 range of thermal network cameras, with their high-performance video analytics, as an ideal tool for such perimeter applications. The device’s thermal imagery allows users to detect people, objects and incidents round the clock in all conditions, from pitch darkness to bright sunlight.

With their improved image quality and a higher resolution (640×480) sensor, the AXIS Q1932-E and AXIS Q1932-E PT Mount optimize detection performance in perimeter applications. Sharp images are maintained with an edge-preserving noise reduction feature and blur and ghost effects are removed to improve the image further.

This is designed to improve contrast across the entire image whilst keeping noise levels low and not losing details or temperature information. The result is that the scene is easier to understand, the surroundings are recognizable, and objects, people etc. are identifiable.

FUR promotes its Thermal Fence as the only solution on the market that ‘brings the control and monitoring of all of your perimeter security sensors together in one fully integrated and geo-referenced display’.

It can operate over the same IP network as an existing camera network, but with its own distinct display for all thermal camera video and other sensor outputs.

“Bringing all of your thermal cameras and other perimeter security sensors together in one convenient display gives you rapid threat detection and assessment, allowing you to deploy your assets efficiently, effectively, and to their full advantage,” says the company.

Thermal Fence can be used in a variety of configurations, depending on the size of the site being protected. In its simplest form, a single thermal security camera and a box of FUR Sensor Manager software can be used to establish a virtual perimeter, with customized alarms and tripwires to warn security staff of possible incursions into the protected zone.

Higher risk sites
For larger, more complex of higher risk sites a layered perimeter defence system can be created by integrating multiple thermal cameras, CCTV cameras, and non-video alarm sensors like FLIR’s shaker fences and RFIDs on an IP network. In this case the thermal security cameras, with their video analytics, work together with a range of non-video alarm sensors (including RFIDs, microwave systems, fibre, radar technology, fence detectors and third party devices) to give the highest level of perimeter detection capability.

“By using all of these tools together to create customized exclusion zones, trip wires, and even areas of layered protection, the FUR Thermal Fence security system gives you the best multi-dimensional perimeter security.”

All the FUR sensors are ‘geo-referenced’, clearly identifying the location of any potential intrusion.

Designers can integrate CCTV cameras, thermal cameras, and other third party intrusion-detection sensors into a single, geo-referenced system. In addition, as it can be configured to run in parallel with other video management systems on the network, it also effectively provides system back-up without the expense of installing redundant network infrastructure. Thermal Fence can also incorporate pro-active sound and light alarms to deter theft or property damage at the earliest stage.

Coordinated response
To help coordinate effective response to any verified intrusion the system can also be configured to send security personnel e-mails and text messages of alerts, so everyone who needs to know about an event is in the loop.

Finally, the Thermal Fence solution allows recording of up to 25 channels of MPEG-4 video on FLIR’s nDVRs for easily retrievable records of all potential security breaches.

In conclusion, the aim of nearly every perimeter defence solution is to deter intruders, to delay them, to detect their attack quickly and reliably, and to give security teams the time and the information they need to respond.

Thermal cameras are a great part of the mix when used to provide the earliest, most accurate detection across extensive distances. Particularly where critical infrastructure and high risk sites are being protected, it is no longer a question of choosing between physical security and monitoring with cameras: both are needed.