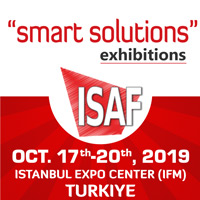 ISAF, one of the world’s well-known industry fairs, will be held for the 23rd time on October 17th-20th, 2019 with the growth targets. Developing with a substantial and significant growth since the first day it was organized, ISAF has reached a size of over 20,000 m2 today.

The only unrivaled local event in the sectors it covers, ISAF is one of the most well-known, recognized and followed events by the whole sector in the world and is the largest event in its geography. Growing and increasing its quality even at a time when economic indicators are negative in the world, ISAF has achieved 100% exhibitor satisfaction in 2018. This growth and development at the ISAF Fair has led to a further increase in the 2019 targets. In 2019, ISAF will be organized in 2019 with more strenght in a way to cover 5 areas again:

Covering 5 interconnected topics, ISAF is organized with more strenght thanks to the higher number of exhibitors, product variety, and the number and richness of the visitors. You must also take your place as an EXHIBITOR. For more information please visit our website www.isaffuari.com or visit the related links.