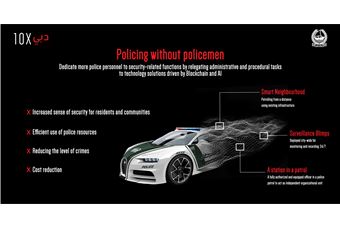 Posted at 11:11h in News by Claire Mahoney

Dubai Police has proposed a pathbreaking project “Police Without Policemen” as part of the Dubai 10X initiative. The project will consist of three activations which aims to implement the vision of Dubai as a city of the future through innovative steps that bring futuristic solutions and contribute to the competitiveness of the city.

Dubai Police’s ”Police Without Policemen” activations include setting up fixed cameras on fences and homes; to enforce the security and safety of the community through a combination of crowd sourcing and deployment of advanced technologies. The second activation entails the launch of a surveillance blimp; an airborne early warning control system that oversees open spaces and projects under construction. The third and final activation is labelled as the ‘Station in Patrol’ – which aims to provide rapid response to emergencies and replace the need to build traditional police stations.

The Dubai Police projects were launched by H.H. Sheikh Hamdan bin Mohammed bin Rashid Al Maktoum, Crown Prince of Dubai and Chairman of DFF’s Board of Trustees, along with several other innovative and futuristic proposals for Dubai 10X, at the 6th World Government Summit, held in Dubai in February 2018.

The Dubai 10X initiative seeks to position all of Dubai’s Government entities 10 years ahead of the rest of the world in all sectors, therfore propelling the Emirate into the future by implementing today what other cities around the world could be implementing 10 years from now.

HE General Abdullah Al Merri, Dubai Police Commander-in-Chief said: “With these projects we are bringing to reality the concept of no policemen policing and ensuring that we achieve the highest levels of security and safety for our people without the need for policemen being present on-ground24/7. Through these projects, we aim to strengthen our partnership with the members of the community to strengthen safety and security standards, and respond promptly to any challenges, and ensure the happiness of our citizens and residents.”

He added: “Sometimes in traditional policing measures, valuable time is lost in identifying and arresting criminals. However, with the disruptive innovation that we propose through our new projects that deploy the latest technologies, we aim to scale up operational efficiency. These projects will serve as effective tools that help us achieve our goal of serving our people. In this, we will leverage international best practices that will benefit the community and the police force.”

The Dubai Police projects will contribute to enhancing the sense of security to the community and reducing the level of crimes. It will also transform the role of the community from being just beneficiaries to being active contributors that promote overall security and safety. The projects will also enhance the ability of police to respond swiftly to future challenges, and are aligned with the with smart police stations announced by the Commander-in-Chief.

“The public are our first and foremost strategic partner. We are also working with Dubai Silicon Oasis Authority and property developers, in general, as well as private sector entities that will supply, install and operate the projects to be completed in two years through rigorous testing and conforming to all requisite protocols and standards,” said HE Al Merri.

DFF’s CEO H.E. Khalfan Belhoul said: “The UAE – and Dubai – is home to several nationalities who live and work in harmony, following the rules and respecting the rights of others. The police force plays a central role in ensuring the safety and security of the people and our national assets. The projects announced by Dubai Police as part of the Dubai 10X initiative leverages disruptive innovation to strengthen safety standards that will benefit the entire city.”

H.H. Sheikh Hamdan has approved 26 projects presented by 24 government departments, for the Dubai 10X initiative. The shortlisted projects were evaluated by a panel of international experts from more than 160 ideas submitted by 36 entities in less than 365 days.

Government entities are joining in the effort to implement their projects in collaboration with innovative tech companies as per the directives of H.H. Sheikh Mohammed bin Rashid Al Maktoum, who called on all government entities in Dubai to embrace today what other cities will be implementing 10 years from now, as he launched the Dubai 10X initiative during the 5th annual World Government Summit in 2017.