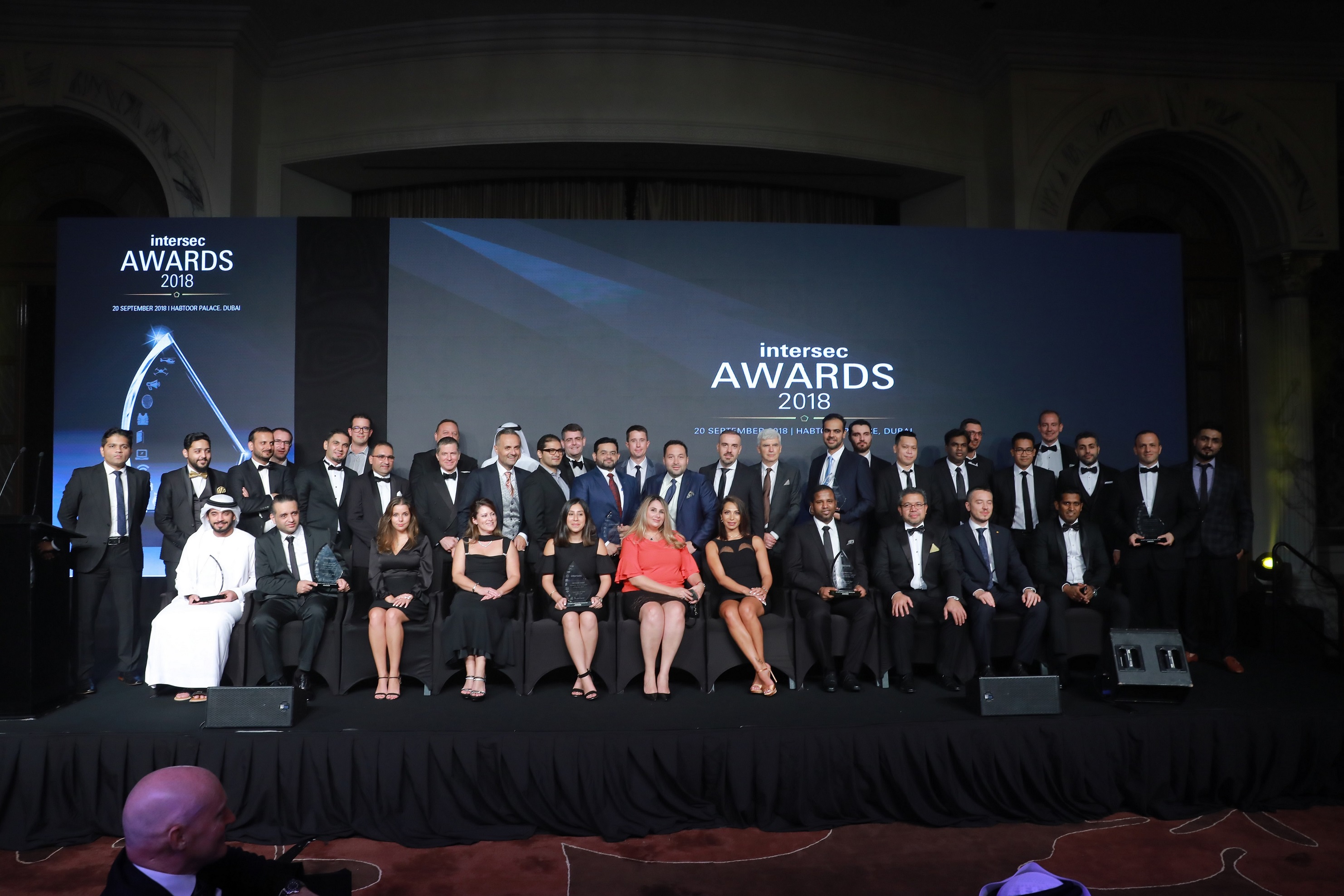 Posted at 09:28h in Intersec, News by Claire Mahoney

Leaders in security and fire protection have been honoured in Dubai at the first Intersec Security Awards – the only awards in the region dedicated to fire and security.

The Twelve winners across 11 categories were announced in front of 250 industry professionals at a gala dinner on the 20th September 2018 at Dubai’s Habtoor Palace, after a 12-strong judging panel deliberated on the merits of the 55 finalists, shortlisted from an initial field of 150 entries.

The Dubai Frame came out on top in the Large Scale Fire Project of the Year category, as did The Dubai Mall Fashion Avenue in the Security Retail Project of the Year. Engineering firm WSP was the consultant for both projects, making the Canadian headquartered company the only dual winner of the night.

Meanwhile, the Security Public Assembly Project of the Year category was too close to call, and ended up with a tie, as both the King Abdullah Economic City Hijaz Gate by SecuTronic and Sheikh Zayed Sports City Stadium by MVP Tech shared the honours.

The 1st Intersec Awards are organised by Messe Frankfurt Middle East, which also organises Intersec, the world’s largest security, safety, and fire protection trade fair which takes place every year, and returns for its 21st edition in January 2019 in Dubai.

Ahmed Pauwels, CEO of Messe Frankfurt Middle East, delivered the opening welcome address: “The Intersec Awards recognise the most outstanding projects and products that are the benchmark of the Middle East commercial security and fire safety industries.

“The hugely positive response to the inaugural edition vindicates our decision to launch the region’s only awards ceremony of its kind, and the winners represent the embodiment of the vision, creativity, ingenuity, and sustainability that is the whole spirit of tonight’s celebration.

“This is the one time of the year where industry stakeholders can gather and recognise each other’s achievements in keeping private and public spaces safe and secure, from manufacturers, authorities, consultants, and contractors, to the end-users and clients,” Pauwels said.

The Dubai Frame, a new architectural landmark on the Emirate’s already remarkable skyline, is approximately 150 metres high, resembling a giant picture frame. Unlike many Dubai buildings which are intended for residential or commercial use, the Dubai Frame, which opened in January 2018, is a bespoke custom structure serving as an observation deck providing 360 degree views over the city’s old and new parts.

WSP provided fire and life safety consultancy services during the design and handover period, playing a pivotal role during discussions with the Dubai Civil Defence showing how the unique and bespoke structure meets the fire and life safety goals of the UAE Fire and Life Safety Code.

Alexander Castellanos, a WSP Consultant who worked on the project, said ensuring that sufficient exit capacity was designed for the functional intent of the Dubai Frame was one of the project’s biggest challenges: “The main goal for fire safety is to ultimately preserve life of occupants and allow them to evacuate a building or structure in the event of a fire.

“Drawing from our experience in projects where occupants are based on operational capabilities of spaces, we provided guidance and coordination with the Dubai Civil Defence so that the space would be managed and the number of occupants would be limited based on the functionality of the space.

“This approach, supplemented with the implementation of active and passive fire protection systems, and management protocols, allowed the development of an evacuation strategy which met the goal of ensuring the safe evacuation of occupants in the event of a fire,” said Castellanos.

Elsewhere, the Abu Dhabi Monitoring and Control Centre’s (ADMCC) Safe City Falcon Eye Project by FLIR Systems was adjudged as the Security Infrastructure Project of the Year at the Intersec 2018 Awards.

The ADMCC was formed with a vision to make Abu Dhabi the world’s safest city, implementing a leading solution for public safety bringing together a security infrastructure network comprising license plate recognition, facial recognition, video analytics and video management from over 45,000 sensors spread across the Emirate under a single unified platform, ensuring the safety of its residents around the clock.

The Falcon Eye project by American manufacturer FLIR Systems was designed in accordance with the directives of the Safe City initiative of the Abu Dhabi government. The project is planned to be spread over multiple phases, with the scope for the initial phase to protect the prime city locations and critical infrastructure.

This involved deploying the network, outdoor and data centre infrastructure for over 600 license plate cameras, over 7,000 surveillance cameras with around 100 cameras enabled for real-time video analytics and a further 100 facial recognition cameras.

The second phase of the project is focused on expanding the geographical coverage to the rest of Abu Dhabi, with state-of-the-art modular data centre and system architecture, to support an expansion of the overall sensors to 2,000 license plate cameras, 20,000 surveillance cameras with at least 2,000 video analytics enabled cameras and a further increase in facial recognition capabilities.

Harry Jackman of FLIR Systems, said: “The security industry has gained and continues to benefit from the Falcon Eye project in many aspects. The project serves as a reference case across the EMEA (Europe, Middle East and Africa) region and around the world, due to its scale, breadth, unique combination of technologies and applications.

“Furthermore, multiple individuals that continue to be involved in the Falcon Eye project, including designers, architects, consultants, IT and engineering experts, product and project managers, have gained unique experience and expertise allowing them to lead the industry utilising the knowledge and tools they gained throughout the project.

“Given the size, scale, breadth of technologies, range of applications, innovation, deployment excellence and all the information provided above, we believe that the Falcon Eye project goes far and beyond any other security project that has been deployed in the region, and probably worldwide in recent years,” added Jackman.

More details about Intersec and winners at 1st Intersec Awards is available at: www.intersecexpo.com