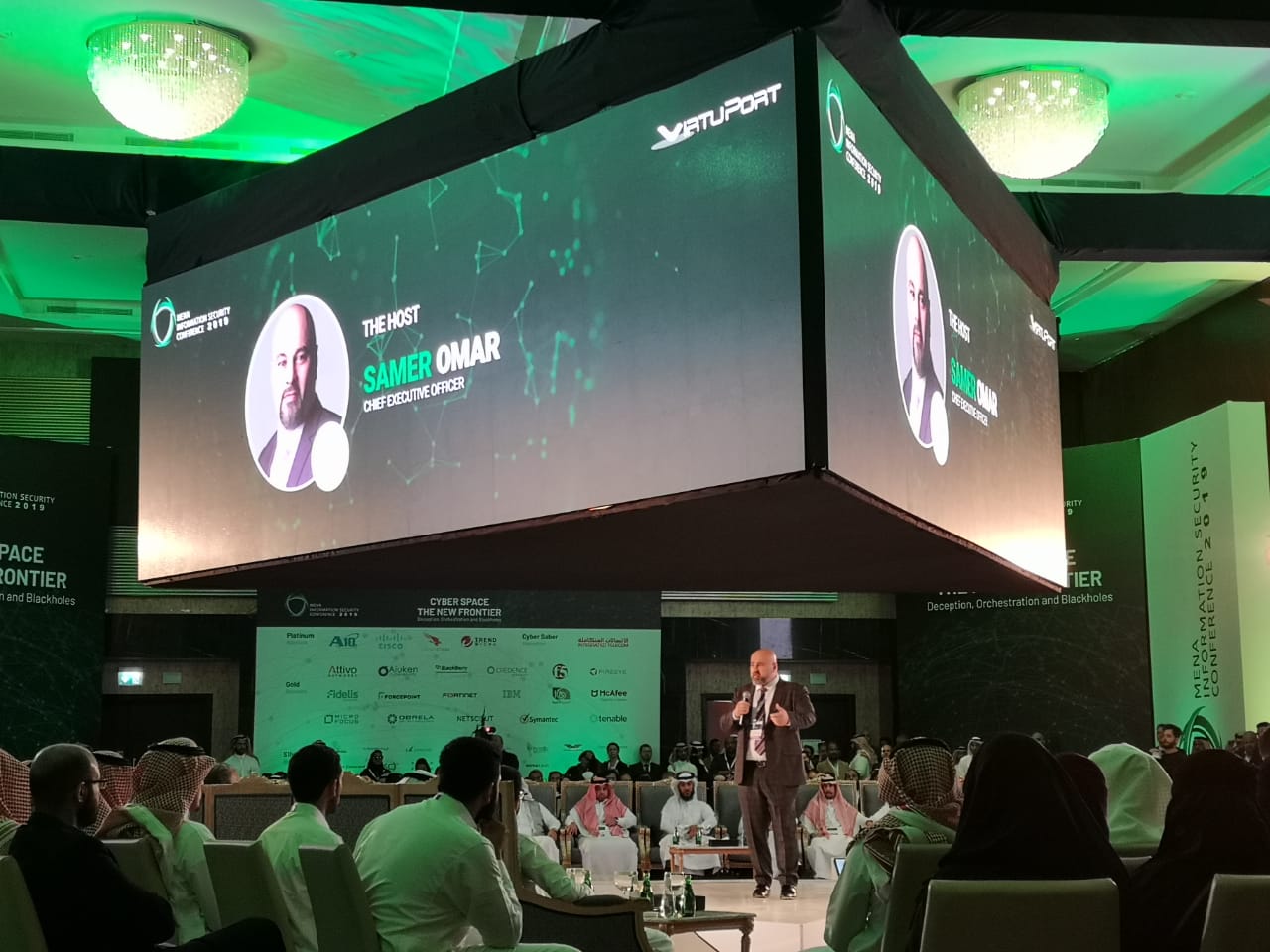 Posted at 09:42h in News by Claire Mahoney

VirtuPort inaugurated the 7th edition of the Middle East and North Africa Information Security conference 2019, under the theme: Cyberspace, The New Frontier Deception, Orchestration and Blackholes”, yesterday in Riyadh (9th Sept). The conference was attended by world experts and international companies specialising in cybersecurity.

According to Bahi Hour, SE Director at META – Attivo Networks, 87% of breaches took minutes or less. Additionally, only 3% of breaches were discovered as quickly, while, 68% of them took months or years to be discovered.

During his speech titled ‘Deception-based Threat Detection Myths & Realities – Changing the Game on Modern-day Attackers’, Bahi Hour stated that according to the Mandiant 2018 M-Trends Report, the time taken to discover the breaches and attacks is up to 106 days. This number increases in the Middle East & Asia Pacific where companies take even more time to discover the breaches.

During his speech titled “Connected Threat Defense’, Hussam Abu-Rida, technical lead at Saudi Arabia – Trend Micro, pointed out, “Borderless enterprise and rising sophistication of threats has made it harder than ever for IT to protect their organisations”. He further added, “Typically, these organisations are deploying a variety of security products from different vendors, which makes it harder manage the many points of security”.

”Our vision is to make the world safe for exchanging digital information. From a product perspective, this means that organizations need to be in a position to manage risk before, during and after an attack”, Abu-Rida explained, “This requires a layered approach to security – leveraging a range of techniques that all work together – sharing threat intelligence across the enterprise and speeding the time to response”.

During the “Protecting your applications and data in an evolving risk environment” session, Moataz Al-Tarif, F5 Head of Presales Saudi, Egypt and North Africa, reviewed a report by Garner that the number of IoT devices and solutions will reach to nearly 20.4 billion devices. Currently, 50% of the world’s population is online, but the use of the IoT platform is still limited. Furthermore, 50% of the companies surveyed confirm security concerns remain the biggest argument against the prevalence of the Internet of Things.

He added: “Some external factors that contribute to the increase of cyber-attacks risks include the rapid development of technology and the high profitability of cybercrime, while the internal obstacles faced by companies against cyber threats are the lack of specialized human resources and the existence of internal communication problems within companies, in addition to the geographical separation factor. ”

Over the past three years, more than 11.7 billion records and more than 11 terabytes of data have been leaked or stolen in publicly disclosed incidents, said Patrick Grillo, Senior Director, Security Strategy at FORTINET, at the #MENAISC2019. He further explained explained that the Shamoon 2 virus – for example – penetrated a number of oil and gas companies across the Gulf and scanned the discs behind political messages, and in December last year the virus Shamoon 3 paralyzed and infected a number of Gulf IT companies.

On his part, David Williamson, Director, Cisco Customer Exeprience explained that despite that most companies automate by using such tools as Microsoft SCCM, SolarWinds, people generally hesitate to automate in their own organizations. This is because they fear that it’ll go wrong and cause unintended, serious consequences on their network and systems – due to bad input data, failure of automated process or failure of automated controls.

As 5G enters the markets around the globe, Lee Chen, Founder and CEO of A10, explained that the most common challenge facing 5G technology is security. He went on to explain “94% are concerned about security in 5G while 62% think DDoS protection is most important. It seems then that better security measures will surely improve the integration of 5G into our digital lives.”

Moreover, during the #MENAISC2019, he shed light on cyber attacks on IOT are slowly becoming the norm. Recent Data from 2018 have concluded that peak attack size has reached a whopping 1.7 Terabits per second.

During his speech, Roland Daccache – Team Leader – Systems Engineering – META at CrowdStrike, warned that adversaries are Getting more sophisticated and smarter. Nation states attack are the most sophisticated and are considered to be a non-malware attack which helps the virus avoid detection by antivirus, IDS, next-gen firewalls, etc. Adding to that, they may look like a typical IT admin and will not exploit vulnerabilities.

The new Cyber Saber Hackathon exclusive sponsor this year Integrated Telecom Company (ITC).  While the MENAISC2019 team welcomes the largest number of sponsors for this year’s event; with many returning from previous editions which is a testament to the success of the conference and its importance. The platinum sponsors for this year’s conference are A10, Cisco, Crowdstrike and Trend Micro. Gold Sponsors are Aiuken, Attivo Networks, Blackberry Cylance, Credence Security,  F5, Fireeye, Forcepoint, Fortinet, IBM, I(TS)2, McAfee, Microfocus, Obrela Security Industries, Netscout, Symantec and Tenable.