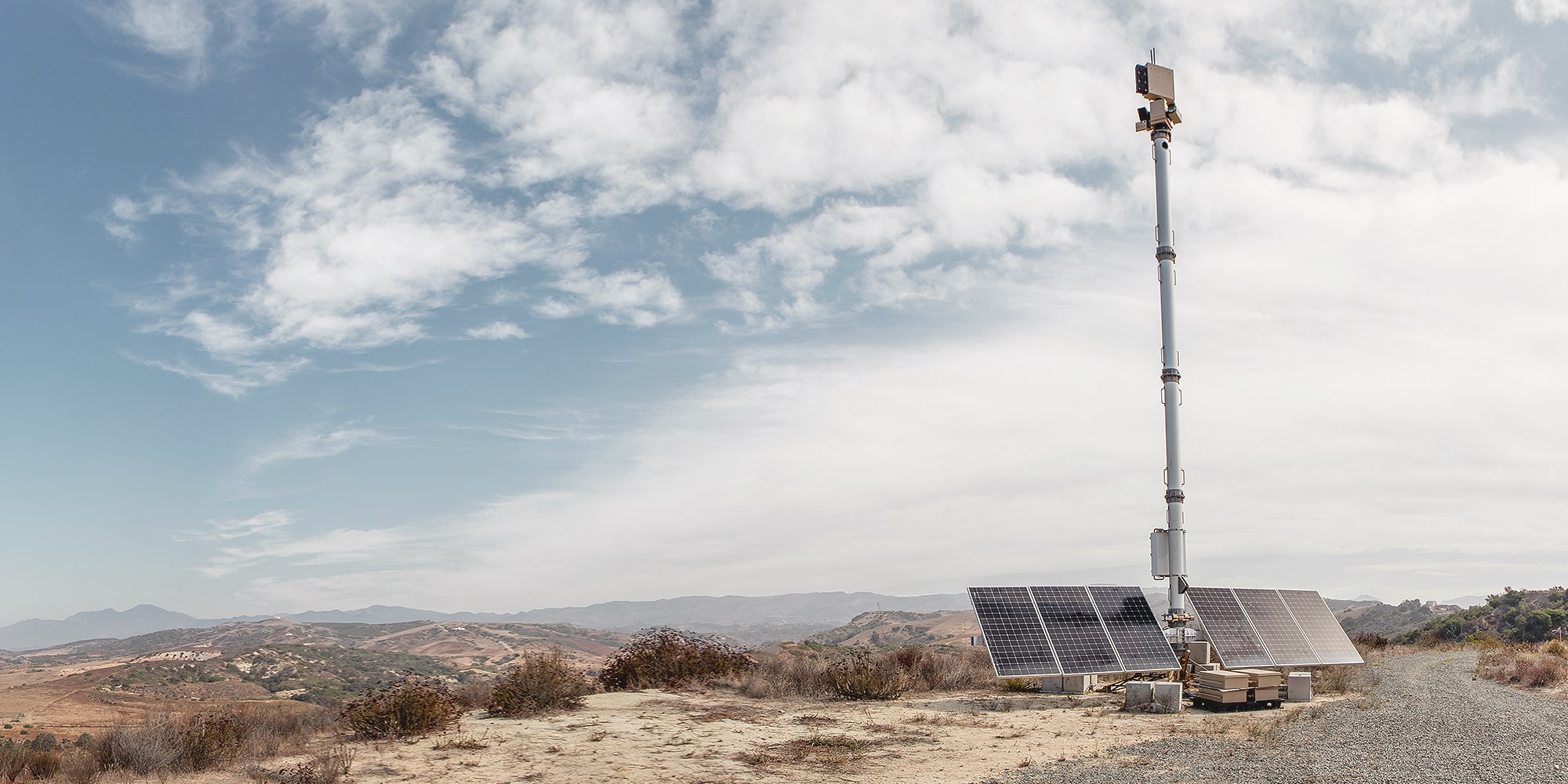 Fuelled by a sea change in communications, power, and surveillance technologies, rapidly deployable CCTV towers are now high on the agenda for commercial and governmental users across the globe, including the Middle East, as an extremely cost effective and flexible option to strengthen a location’s defences. Specifically, we are witnessing this temporary form of CCTV being adopted when there is a real imperative to proactively tackle crime, security, and safety issues across a wide range of scenarios.

In terms of the methods being rolled out to power the latest generation of towers, the WCCTV HD Solar Fuel Cell Tower from Wireless CCTV (WCCTV) is a good indicator of the state of play here. Featuring the same specifications as the vendor’s WCCTV Site Tower it builds on these by adding a hybrid power solution based around a methanol fuel cell cartridge and solar panel to provide, claims WCCTV, uninterrupted autonomous power for up to nine months for off-the-grid locations, before a refuel is required. In addition, WCCTV underlines that the HD Solar Fuel Cell Tower does not require any external tanks – or cages – and as the solar panel is attached directly to the unit no additional construction is necessary on site.

The growing footprint of potential applications for temporary surveillance technology has, not surprisingly, driven vendors in this space to develop an ever more diverse portfolio of fully integrated 4G – and soon to be 5G – and Wi-Fi enabled mobile CCTV towers. As well as innovative power sources, today’s towers are often configured with an array of cameras, increasingly AI (Artificial Intelligence) supported video analytics at the edge, plus multiple motion detectors, and audio-challenge for an event-driven surveillance solution.

Thermal cameras too are starting to feature in the CCTV tower equation, a case in point being WCCTV’s HD Thermal Smart Tower that is supplied with fixed thermal cameras and/or a thermal infrared PTZ camera with edge analytics running high accuracy alarm detection rules. WCCTV believes that this model is ideally suited for large sites or where overhead electricity line or cable trenching work is underway given the prevalence of cable theft. From a practical standpoint towers are designed to be quickly towed or transported to site and automatically extended and deployed. To put the speed of CCTV tower deployment into context, Clearway – which specialises in vacant property security – reckons that a typical installation of its CCTV Tower offering only takes about 20 minutes to complete, followed by a couple of hours to go ‘live’ with monitoring.

As mentioned, typical tasks for today’s CCTV Towers are wide and varied, whether it be protecting a constantly changing construction site – without the need for major works – against the theft of valuable materials; providing an early warning of suspicious activity at remote off-grid critical infrastructure sites and vulnerable border areas; assisting with the smooth management of large-scale events or controlling crowds to keep rival fans apart at major football games.

A prime example of how today’s towers are shaping up to meet security challenges on the ground is SkyWatch from FLIR, a model that is positioned as a mobile surveillance and deterrence platform. According to FLIR the rugged tower, which can be operated as manned or unmanned with an air-conditioned and heated cabin, has been designed to withstand winds of 60 mph. Once towed to site the vendor reveals that SkyWatch is ready for deployment in a matter of minutes – and is then raised up to its full height in about 90 seconds – to deliver 360 views of its surroundings from 27 feet (8.23 metres) up.  Payloads for SkyWatch, says FLIR, may comprise fixed or pan-tilt IR, night vision and visible light cameras, plus ground radar, DVR, LED searchlights, and PA systems.The scenarios where FLIR reckons SkyWatch really comes into its own are for large outdoor events and the extra, high visibility, monitoring of high crime areas. Detailing the favourable economics of SkyWatch, the vendor reckons by virtue of such a high vantage point that a single law enforcement or civilian operator can, potentially, cover an area equivalent to three or more people at ground level.

Also signalling the way ahead for CCTV towers – this time from a detection perspective – the Quantum Tower from Orbis is set-up to integrate advanced CCTV technology with LiDAR (Light Detection And Ranging) – an advanced remote sensing method. In practice, LiDAR – as the name suggests – employs light in the form of a pulsed laser to measure variable distances to the Quantum Tower so building a detailed 3D image of the surrounding site. This 3D view is enabled, explains Orbis, by the application of eight different lasers, ranging to 100 metres, that scan an impressive 400,000 data points per second. The resulting granularity of data means, says Orbis, that, effectively, an unlimited number of moving objects can be tracked and traced on a protected site.

Putting a few figures on the cost of ownership case for CCTV towers, Orbis suggests that on a typical deployment this approach could amount to less than half the cost of a comparable manned guarding solution and Wireless CCTV (WCCTV) gives an even higher number – up to 86 per cent cheaper – when discussing its HD Site Tower model.

The view from the border

At the more specialised end of the scale, fast track solutions to ramp up security on border pressure points against illegal immigration, people trafficking, drug smuggling, and terrorism, are also very much in the frame as enhanced situational awareness enables authorities to maximise the impact of their thinly spread resources. Heading across the Atlantic, on the question of border security one US vendor who is seeking to push the boundaries of what is possible with tower-based solutions is Anduril Industries which was co-founded by Palmer Luckey who sold his previous company Oculus to Facebook for US$2 billion in 2014. Anduril positions itself as an AI (Artificial Intelligence) product company and has already seen its solar powered Sentry Tower solution – that incorporates innovations like AI, sensor fusion, and mesh networking – being trialled on the US-Mexico border.

Underlining the shape of things to come, Anduril points out that the Sentry Tower is designed to ‘autonomously’ handle the task of detecting people, vehicles, or animals, with the solution’s Lattice AI core reckoned to be more accurate at recognising threats than human operators. Weighing up the economics of these advanced solutions, compared to more traditional measures, Anduril suggests that the Sentry Towers cost less per mile than a chain link fence.

Staying with the border security theme, another vendor cutting its teeth on the challenging US border is Elbit Systems of America. Interestingly, it was reported back in September 2020 that Elbit was lined up to provide US Customs and Border Protection (CBP) on the southern (US-Mexico) border with new, trailer-mounted, 80 feet (24.4 metres) tall Intelligent Relocatable Long-Range Surveillance Towers featuring electric-optic and infrared cameras plus ground surveillance radar and communications. This move followed on from the Integrated Fixed Tower (IFT) systems Elbit had already supplied for the southwest border.

The advantage of relocatable towers for CBP compared to fixed variants is naturally the speed of deployment – only taking a day to set-up – and the potential to move them elsewhere should circumstances dictate. Elbit says that the relocatable towers have what is described as a limited AI capability to allow sensors to track an item of interest and alert CBP officers. This AI and machine learning capability is set to be stepped up even further in the new and larger Autonomous Relocatable Surveillance Tower (ARST) system which is set to undergo evaluation in the field this year. Crucially, Elbit points out that ARST extends to 110 feet (33.5 metres) and is configured to detect, track, and identify, an object of interest without human intervention.

Back to the subject of the commercial security deployment of CCTV Towers and the utilities sector is undoubtedly a big market here. A case in point is Wireless CCTV (WCCTV) which reveals that when UK Power Networks (UKPN) – a large distribution network operator in Britain – wanted to protect their electricity substations from trespassers in a thorough and economical way they opted for a technology-based solution, after looking at manned guarding where the cost for multiple sites proved prohibitive.

Initially, WCCTV was invited to complete surveys of the substations – some of which were in remote locations – and to provide a bespoke proposal for perimeter detection. This led to UKPN opting to deploy WCCTV’s HD Site Tower products across their sites. Alongside supplying the seven-metres tall towers, which feature a bright yellow colour scheme as a visual deterrent, WCCTV confirms that it arranged for the monitoring, installation, maintenance, and ongoing redeployment of the towers.